I had been totally unsuccessful at finding a reasonably priced dry box that would fit between my feet and be easy to open in the Kayak. Then I discovered that ammo boxes are waterproof.

I bought a .50 caliber ammo box from an army surplus store for $11 and lined it with a rubber floor tiles (four for $10). The leftover floor tiles are being used in the workshop. Result! It is waterproof and it ought to be able to take a few knocks. I’ve toyed with the idea of spraying it day-glow orange to make it more visible should the worst happen; but I’d rather not draw attention to a box of valuables when it’s around camp or in the car. 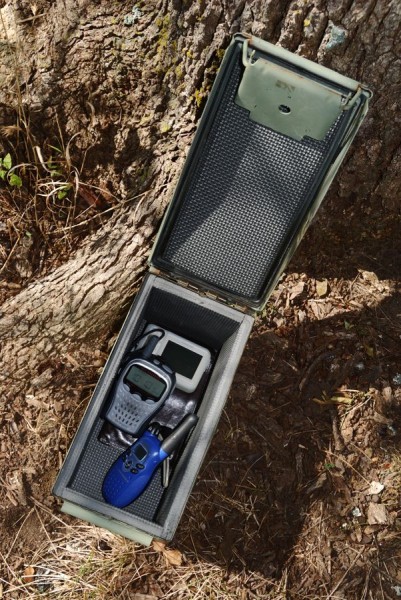 I normally keep my cameras, keys and wallet in it. The box has enough room for either, but not both, of my DSLRs and a couple of reasonable sized lenses.

Storing the weather radio and walkie-talkie in a steel box as shown here isn’t a good idea if you want them to to receive a signal.

No one has told my cell phone this.

While out fishing on Fellows lake it took me ages to realize that the odd noise disturbing the peace and quiet on the lake was the muffled sound of my ‘phone ringing inside the dry box.