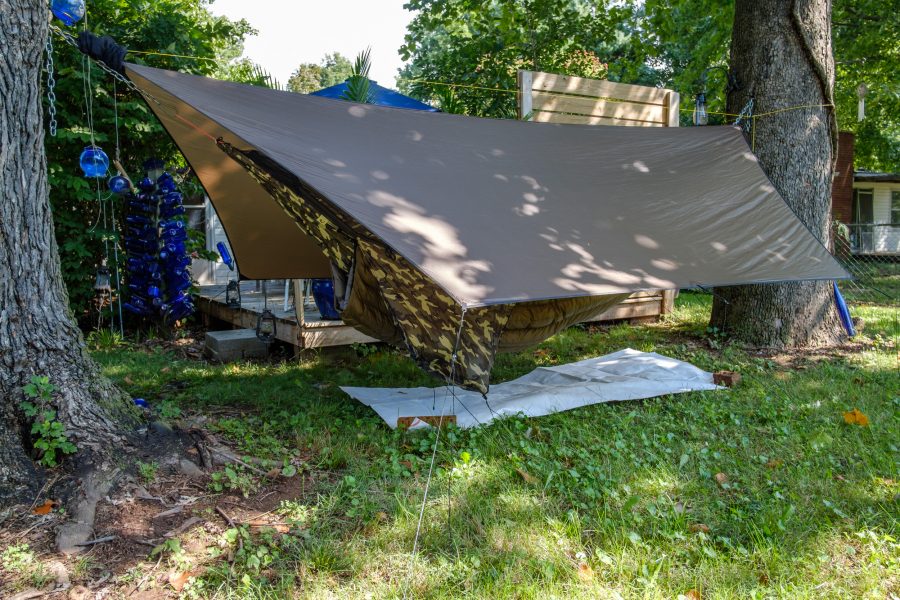 When I last went backpacking I mentally earmarked three things to fix before my next trip.

Trawling the forums looking for ideas I came up with the following list of goodies which I bought from the cottage manufacturers, DutchWare and Hammock Gear.

The forecast yesterday showed that we were in for a lot of quite heavy rain and some blustery wind so I decided to set up the tarp and hammock in the back yard to see how well it coped. It was also an opportunity to tryout my new gear. Just to make it more of a ‘real-trip’ experience, I had to set everything up in the rain, which allowed me to try out my new and as yet unused backpacking rain poncho.

Putting up a hammock In the rain was fairly easy. First I put up the tarp. Once that was staked out I could do a lot of the set up in the shelter it provided. However, setting up the tarp was a bit of a challenge, but only because the trees are a tad too close together at just over 13′. The tarp is 12′ leaving just a little over 6″ at each end to set up the attachments.

Once the tarp was staked out it took less than a minute to set up the hammock, as I already had the chains for our rope lounging hammock adjusted from an afternoon nap a couple of days ago. So no straps to set up.

Taking it slow and easy it probably took around 20 minutes to set up, and it only took that long because of my having to fiddle with the tarp.

That done I spent the afternoon reading in the hammock listening to the often heavy and wind-driven rain on the tarp. Everything worked great, and I went on to spend the night out in the hammock too. And, here’s my initial thoughts on the new gear.

I’m now working on the principle that if I add something to my base pack weight, something of equivalent or higher weight has to go. The only exception I’m making to that is for seasonal items, which is just as well as I’ve ordered a hammock cover and 10° under quilt so I can go out backpacking when it drops below freezing. Hopefully, that will mark the end of my purchases for now and I’m set up for year-round hammock camping.

It worked out that I added a whopping (That’s sarcasm by the way) 8oz for the tarp sock, hanger and sit pad (3oz for the pillow, 3oz for the sidecar, and the rest 2oz). In return, I’ve simplified my packing and saved on a load of Ziploc bags.

In future I’ve decided to leave behind the heavy cotton shemagh that I mainly used for a sit pad, and by changing my cooking pot stand and windscreen I’ve managed to reduce my overall weight by a lot more than 8oz, and it all packs smaller. However, I like my shemagh, it has a lot of uses, so I might invest in a lighter more packable one to replace it.

Now I’m just waiting for the temperatures to fall so I can get out on the trail again.