We bought this super little lantern for backpacking, car camping, kayak camping and home emergency lighting. I was skeptical at first of being able to fit it in my backpack – but it fits in an outside side pocket just fine, it is that small. At 27.2 oz. it’s a bit of an overkill for backpacking. On the plus side it gives a bright all round light (the claim is an equivalent to a 75 Watt light bulb), and coupled with our Coleman Exponent Multi-Fuel Stove it has the advantage of our only needing to carry one type of fuel.

Because of the size and weight we don’t take it backpacking with us on every trip, preferring our headlamps, but we’ll pack it on occasion – especially for those long winter nights. One advantage over gas lanterns and battery lanterns is that you have a pretty good idea how much fuel you have left. 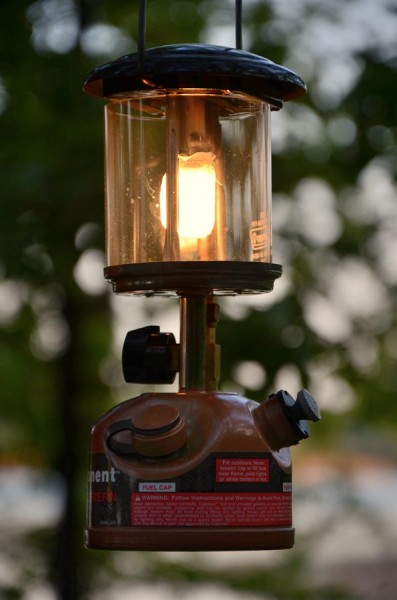 Apparently they no longer make this, which is a great shame as it works very well, is small, and for a liquid fuel pressure lamp relatively light. At lower settings the lamp will last a couple of evenings on a filling.

When needed this lantern (and the stove) can be run on unleaded gasoline. Something we’ve not tried, but it’s useful to know if you get stuck without access to white gas.

The lantern came with two mantles, so we had a spare. I’ve not tried to source a replacement mantle yet. The standard Coleman mantles stocked by Wal-Mart are not intended for use in this lantern but I have read of people using them without problems. We’ve not tried them yet. The mantle has survived several hundred miles of jiggling around in the back of the van not to mention being thrown around in my pack on the trail.

If you’ve not used a liquid fuel lantern before, preparing the mantle and lighting them can be a little disconcerting. Before you first use a mantle you have to burn it. Remove the glass and tie the mantle on, then light the mantle fabric with a match or lighter without the lamp turned on, and wait for the mantle to completely burn. I’ve found sometimes I have to help the burning finish with an extra match or blast from a lighter. This sounds strange but the working mantle is actually a delicate fabric of ash. Once it’s reduced to a white ash replace the glass and the lantern is ready for use.

Lighting the lantern is simple, but first resist any temptation, and do not overfill the tank. The lantern needs sufficient air gap for pressurizing, and the less air gap the more often you’ll need to re-pressurize the tank. Fifty or so strokes is usually enough to get a full lantern going. I simply hold a lighter under one of the lighting holes with the flame coming up through the base and turn on the gas. After a few seconds it lights, there’s often a lot of smokey yellow flame and the light may pulsate a lot while it is warming up, which takes 30 seconds or more. That’s not unusual and is to be expected with this type of lantern. I’ve been most impressed with how long a tank of fuel will last and how infrequently it requires top-up pumping. A tank of fuel will last us a weekend or more, and provided it’s not running full blast it will go around an hour between ‘pumps’. The flow control can be a bit touchy, but with practice it seems to be okay. One thing I’ve noticed that on full it makes a lot of noise, but throttling back just a little bit silences it without any real change in brightness.

The only maintenance required is a small drop of oil in the pump chamber – which I do every couple of times we take it out. You can buy replacement pump kits, which appear to be quite easy to fit.

Checking Amazon and the Coleman website (October 2012) it would appear that this lantern is no longer available. If you find one I’d recommend grabbing it – especially for car camping, kayak camping and those backpacking trips where more light might be needed.