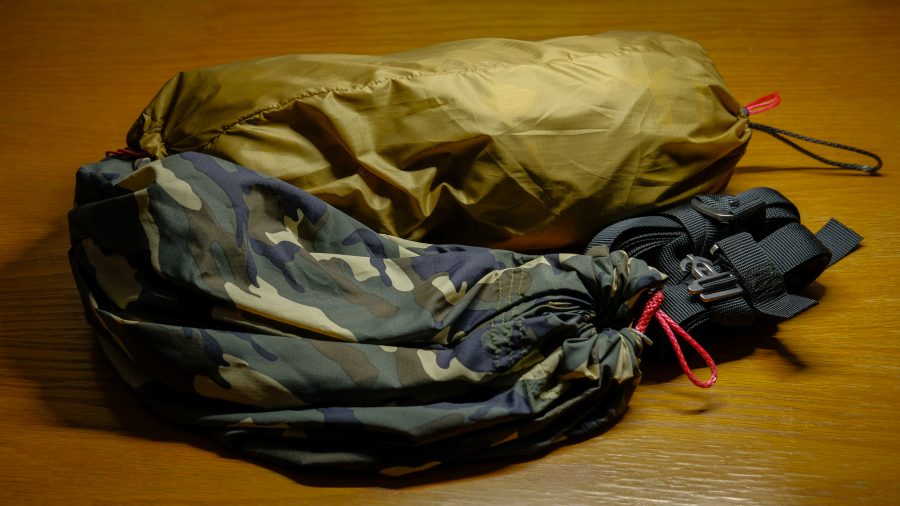 The first of my hammock camping purchases have arrived.

This is the Dutchware chameleon hammock. It’s a lightweight (15oz without the straps), 11′, fixed ridgeline hammock in Woodland Camo.

I spent a lot of hours researching hammocks before deciding on the Chameleon. I had already bought some bits and pieces from DutchWare and been impressed by the quality and customer service.

I bought the suspension straps also shown in the picture, and the ridgeline for my tarp a while back when I first decided to try out hammock camping. In addition to the hammock, I bought the bug net (a tad over 4 oz), and a pair of titanium Beetle Buckles to replace the cinch buckles I was using with our old ‘lounging’ hammock. The Beetle Buckles are small, light and an ingenious design.

Here’s what influenced my decision to buy the Chameleon:

I’m not going to say much about it until I’ve spent a few nights out on the trail, but my first inspection and impressions confirm what I’d read in the reviews. It’s very well made and the Hexon 1.6 material (350lb rating) feels really nice. The double-ended stuff sack was also a nice touch, and I’ll have to find out what material it’s made out of as it’s super smooth. I can say that the hammock compresses down to around the size of a grapefruit, which is excellent.

The tarp and underquilt won’t be with me for a few weeks, as it’s made to order. I’m not sure I’ll be able to wait for them to arrive before heading out and trying out the hammock. There are a few cold nights coming up, but I think I can foresee a quick trip out with my Neoair pad and 0° bag in my immediate future.

Still to come from Hammock Gear:

The great thing about buying made to order gear is that you can ask for changes. So for $20, I’ve opted to have an extra two tie-outs installed on the tarp, which will allow me to use my hiking pole to raise the center, something I really liked with my current cheap tarp, and it will give me more tie-down options if the wind starts to blow.

I must admit that I’m very impressed with the customer service I have received from Hammock Gear thus far. The only problem I have is waiting for the gear to be made!

I did take a careful look at making my own under quilt, but I decided that the suggested six hour build time would be better spent finding some additional consultancy work so I could cover the cost of buying one from one of the cottage industry providers.

December 2018. I’ve really been enjoying the hammock and hammock camping. So much so that I’ve bought a 10° Under quilt so I can still get out in the colder weather. Being able to camp on the side of a hill means I’ve considered places I’d never have camped near in a tent. 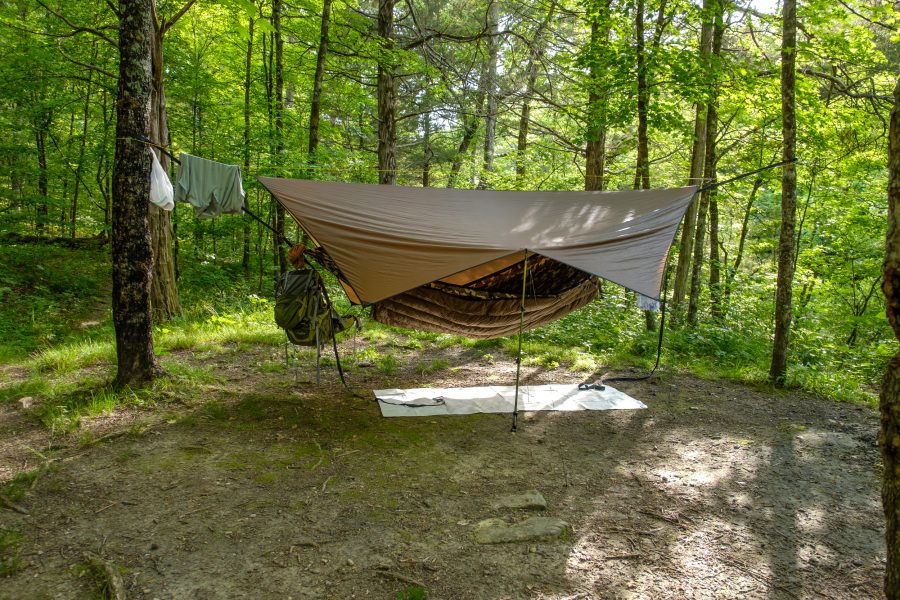 Hammock Gear Tarp and 40° Under quilt with the Dutchware Chameleon hammock.

Gary, with beanie hair and the hammock

Only trees for neighbors

Dutchware Chameleon Hammock set up at around 24′ between trees. I had fun getting the suspension high enough for the span.

My new Chameleon hammock all ready for the night. Nice camo!

My new Chameleon hammock all ready for the night. Nice camo!

Out in the wilderness.