Ginger wanted a pad that was slightly thicker, (more comfy), wider and warmer than our Therm-a-Rest ProLite Plus sleeping pads. We found our NeoAir All Season pad online at a very reasonable price. It’s marked as irregular, hence the great price, but we’ve not been able to spot any irregularities in it.

We have an issue with sleeping pads in general. We’re short. We also prefer wider pads. It ain’t going to happen.
To get a wider pad you also have to have to settle for long pad. You can’t get wide and short. In the case of the NeoAir All Season the 25" wide pad is 77" long, which completely fills the length of our Mutha Hubba tent. We’ve read online that you can shorten the NeoAir pads but we’re not so sure about the NeoAir All Season with its internal baffles. If you know the answer to that let us know in the comments. I’d like to lose 8-10″ off the length of ours.

The pad came with a repair kit and special stuff sack that also acts as an inflation pump.

Take my word for it, the provided inflation pump just isn’t worth the effort.
We tried it for our first test run when the pad arrived and we very quickly gave up and got the compressor from the garage.
It’s not that you can’t blow up the NeoAir with the provided pump, it just takes too darned long.
Fortunately there is a solution which is the Instaflator. It weighs 1.5 oz and costs just a few dollars. 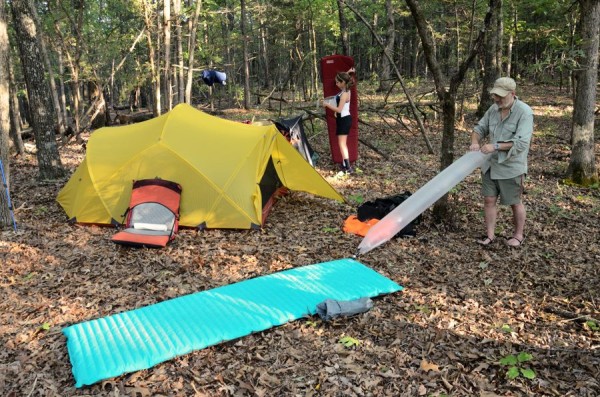 The pad itself is made from fairly thick polyester on the top with a nylon bottom. The large pad weighs in at 1lb 9oz which is less than the smaller, thinner ProLite Plus. The narrower NeoAir 20″ pads weigh only 1lb 3 oz.

A set of internal baffles provide the insulation that really makes this pad stand out. It’s warm,
you can feel your reflected heat.

Folding and rolling it up is very simple. Squeeze as much air out as possible, fold it into thirds along its length and roll it up. Unlike the ProLite it doesn’t want to spring open so you don’t need a tie to keep it rolled up.

Packed, the NeoAir is significantly smaller than the ProLite Plus. 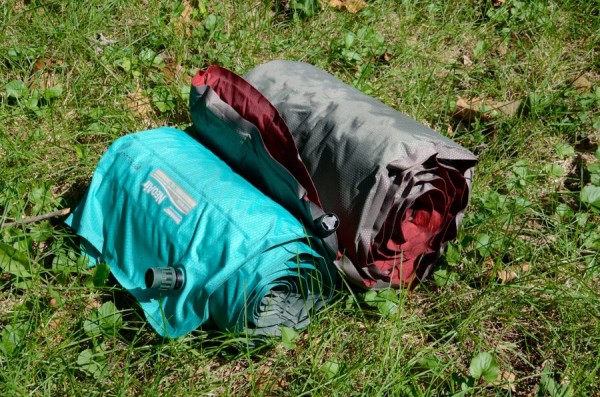 My major worry about the NeoAir is that if it gets a leak you’ll have no pad or ground insulation at all. So, just in case, we carry a repair kit in our emergency pack.

The NeoAir in Use

Checking reviews before we purchased we read several comments about the pad being noisy. This isn’t a problem we’ve noticed. It does ‘rustle’ but not enough to be a nuisance.

However there was a major problem.

After her first night using the NeoAir, Ginger hated it.
So much so that halfway through her second night with it we swapped pads and she went back to the ProLite Plus. The problem is that Ginger is a side sleeper, and in order to have the pad inflated enough to keep her hips off of the ground it was too tight in general and she felt like she was slipping off it. If she deflated it enough to feel more secure her hips would touch the ground.
I’m also a side sleeper and I have not encountered this problem. But my hips are a lot smaller.
Our advice is to give the pad a good try out before purchasing, including simulating lumps by putting keys or something under it.

Being a single chamber pad I have found that you can’t kneel on it without it bottoming out. The air squishes out and makes the pad firmer elsewhere. Sitting can also present a similar problem which may cause difficulties in colder weather if you want to sit on it for an extended period, we need to experiment further on this and report back.

Which brings us to how I’ve found the pad in use. The immediate thing you notice is how warm it feels. It has a 4.9 ‘R’ rating, and it seems to reflect your heat back making it warm to the touch. Using it in 90°F nights I thought it might be too hot, but it was fine. It works a treat with my GoLite 1+ season quilt. So far I’ve extended the use of my quilt (rated at 40°F) down to 34°F with my Sea to Summit liner, and I’ll be trying it down below freezing once it starts getting colder – because carrying a 1 lb 3 oz quilt is a lot easier than a bulky 4 lb sleeping bag. 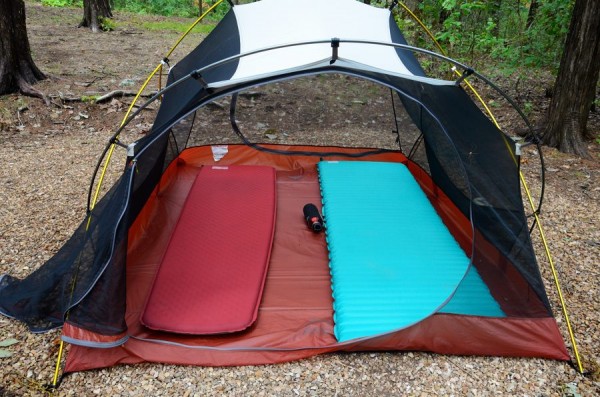 The extra thickness makes for a more comfortable night’s sleep, and I love the extra width which allows me to stretch out without getting an arm or leg on the cold ground. If we could just shorten it I’d be a very happy camper.

Despite being made or a similar material to the ProLite pads, I tend to treat it with a little more respect. It looks a bit like an ordinary poolside airbed which makes me concerned about puncturing or popping it! 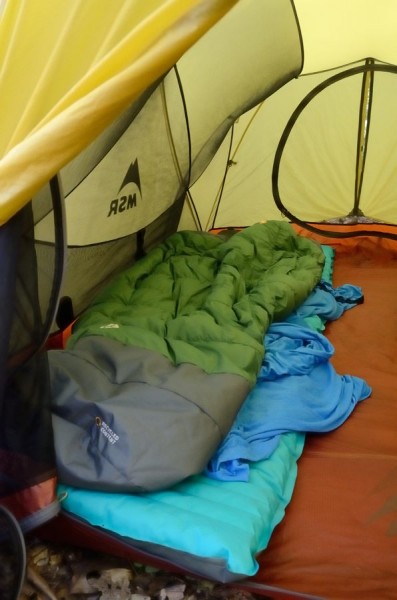 We bought a 25" Therm-a-Rest chair which works fine with the NeoAir and has the added advantage of keeping your bottom and back warm.

Would I buy another? Probably, though I would shop around first, the technology is changing and improving all the time.

The warmth and comfort benefits, combined with the small pack size and weight made this an absolute bargain at the price we paid. Bring on the winter backpacking trips!