This was our second backpacking trip, so we were still learning – especially about finding a spot to camp and reducing the weight of our packs. The weather was rather dreary but we enjoyed ourselves.

Day One – Tonight we get to sleep in the woods

We got away from Springfield on time, picking up Lanie from her sleepover on the way out. At the grandparents I helped load a large steel house sign into the pick-up before we headed off for the last fifty miles or so to our destination; the Devil’s Backbone Wilderness area.

Over the past week we’ve checked the maps and pictures of the wilderness we found online. We had a rough plan of action, starting at the Collin’s Ridge trailhead.

There were no other vehicles in the parking lot, checking the registration log,

it appeared no one had entered the wilderness from the Collin’s Ridge Trailhead in a while. 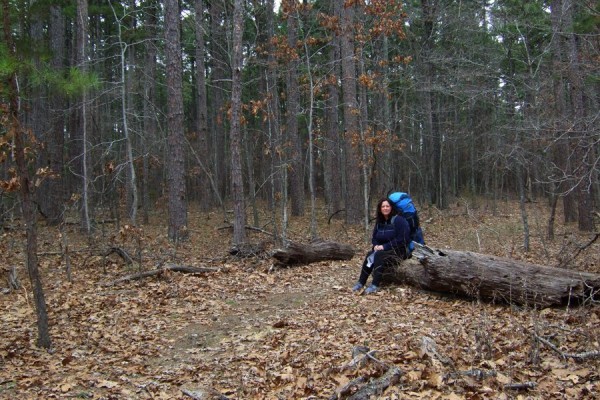 Ginger takes a short rest on the Devil’s backbone 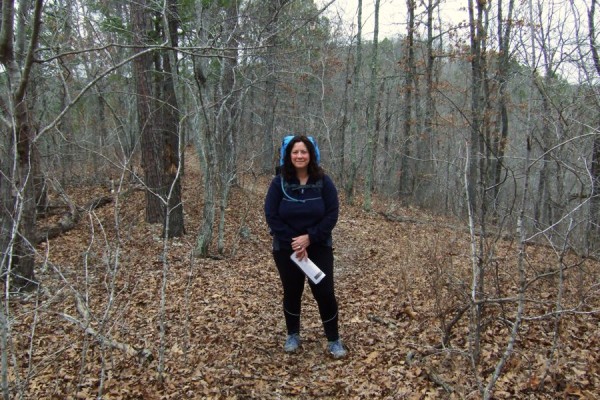 On the ridge of the Devil’s Backbone – the drop off is very steep on either side.

We had a good hike along the Devils Backbone down into Mary Hollow. Ginger particularly liked all the pine trees at the start of the hike. The Devils Backbone was quite impressive with a significant drop off on each side.

The trail actually comes out about an eighth of a mile to the east of where it is shown, which caused us a bit of backtracking while we looked for the trail to McGarr Spring. We found the trail but couldn’t find the spring, there was evidence of water but there was none running. 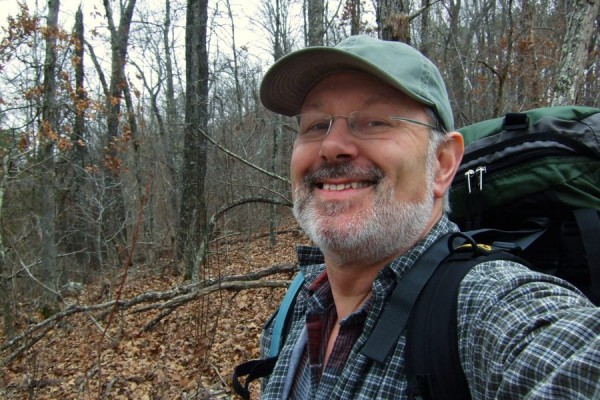 We decided to camp further down the Hollow towards the North Fork river so that we could pick up water in the morning.

The trail was very easy walking being mainly soft dirt. It would have suited my Vibram Five Fingers which I hadn’t brought along. My huaraches worked well, but as expected weren’t tough enough for the the trip, so after a couple of repairs, I gave up and resorted to trainers for hiking and flip-flops around camp. 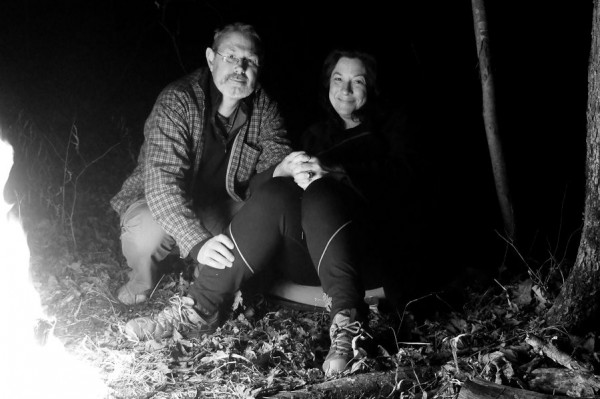 Sitting round the campfire in Mary Hollow. 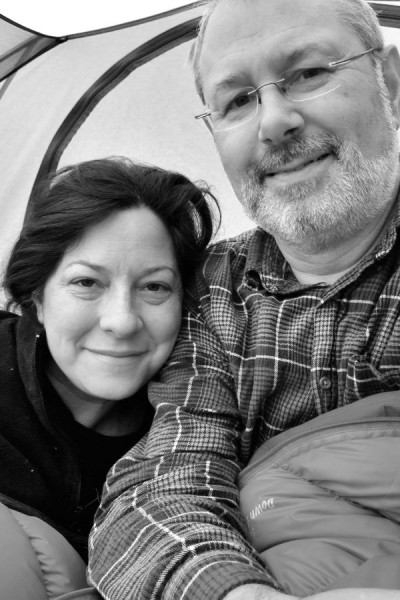 what better way to celebrate our second wedding anniversary than backpacking?

I sure do know how to show a girl a good time! While we were drinking our morning coffee and making our plans for the day. Ginger surprised me with an anniversary gift – a CD. We had no way to play it though!

The overnight temperatures dropped into the mid forties, but we were nice and snug. 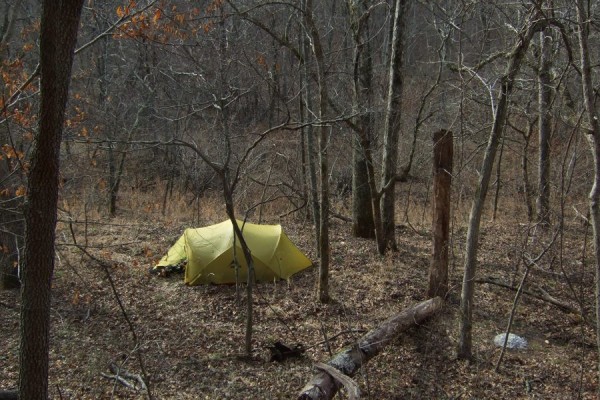 After breakfast and breaking camp, we hiked down Mary Hollow and followed the trail north and west to the North Fork River.

The trail was obstructed by fallen trees in many places, and only a couple of trails are marked, so you need a map and to read the ground to make sure you stick to the right trail. We stopped briefly to admire the bluffs on the North Fork and to be completely disgusted at the mess left behind presumably by people camping in the wilderness while floating down the North Fork River. The almost complete lack of trash on the trails of the wilderness would suggest that this is the case. 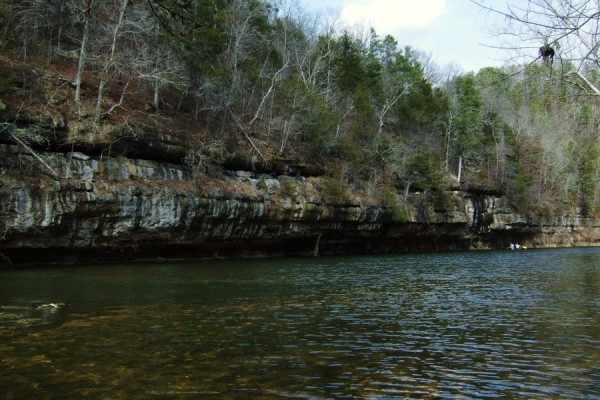 Bluffs on the North Fork River. We watched one Jon boat and a canoe go down the river – four people, the only people we’d seen so far.

We then climbed the 360 feet to the top of McGarr Ridge, and walked along the ridge and then negotiated the very steep 360 foot descent to visit Blue Spring, where we filled up with water and had lunch. 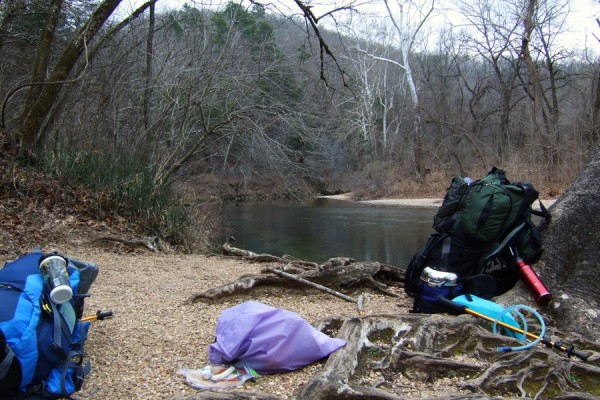 We stopped for lunch at Blue Spring, which feeds into the North Fork River. We filled up with enough water here for the rest of our stay. 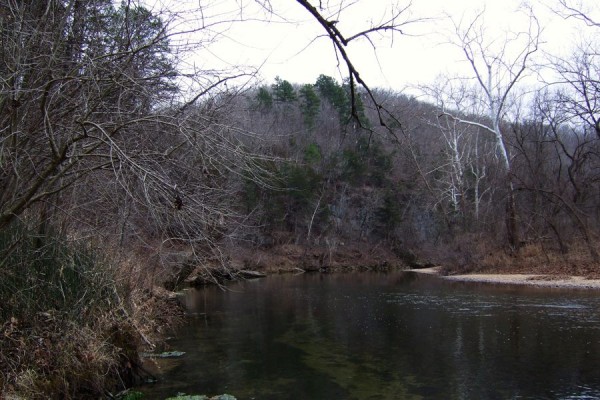 We’d just descended the hill in the distance – 300 ft. After lunch we had to climb it again.

Our plan was to camp somewhere near where we’d first seen the river, and that meant retracing our path, climbing and descending McGarr Ridge again. We surprised oursleves by getting up the ridge quite quickly. Our trekking poles, brought for this trip, proved themselves invaluable going up and down the ridge.

So we followed the trail north a short while and then cut down to the river. We found a nice secluded gravel bank where we spent the night, accompanied by the sound of running water. 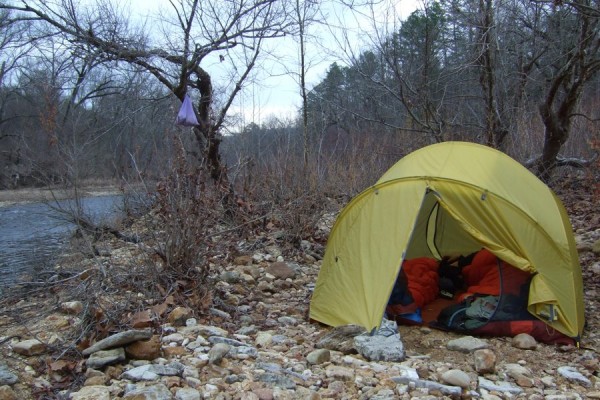 Camped by the North Fork River – Devils Backbone Wilderness. The purple bag contains our food and trash. It was up the tree in an attempt to discourage raccoons from grabbing it or invading our tent. 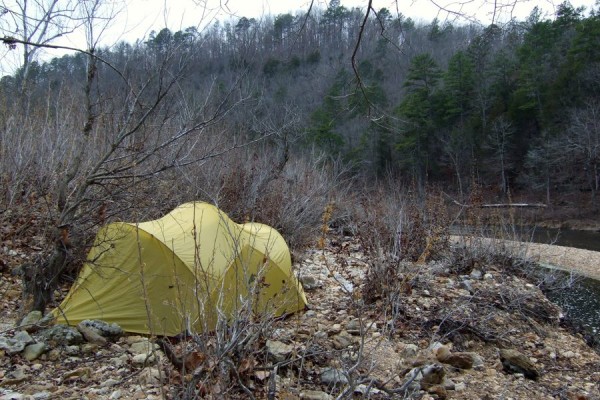 It had been quite cold overnight and it started to rain just as we were about to break camp.

As the rain had been forecast, we had set the tent up so that we could take it down with the rain fly still up

– which meant we were able to put just about everything away dry. 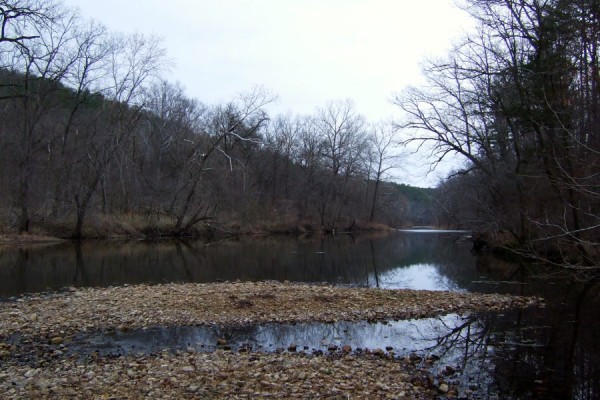 we encountered several trails that aren’t marked on the map, which made for some educated guesswork on the navigation

The trail up Collins Ridge doesn’t appear to be marked, and we encountered several trails that aren’t marked on the map, which made for some educated guesswork on the navigation, which proved correct once we could see the lay of the land and check it against the topo map. The hike started with another 300+ foot ascent, quite enough for us out of condition hikers. 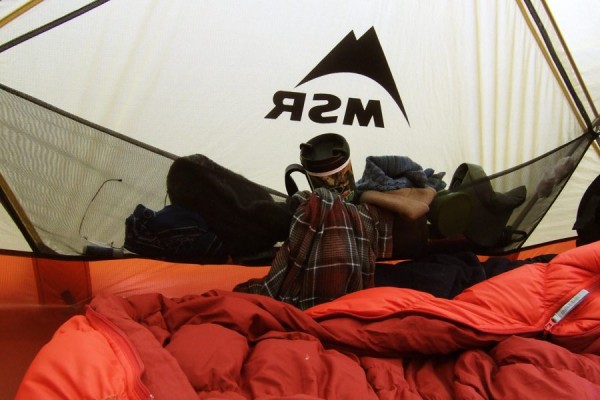 The side pockets in the Mutha Hubba tent are huge, but the amount of stuff in them hints at a lot of pruning to be done (and still to be done).

Before too long we were back where the trail along the Devils Backbone splits off, and shortly after that we stopped by a stone pile which acted as a tripod for today’s picture.

in the two and a half days we’d been hiking the trails we’d not met anyone.

We saw and heard lots of Armadillos (Dasypus novemcinctus), and the tracks of a bobcat (Lynx rufus) but no people, which is pretty much how we like it. 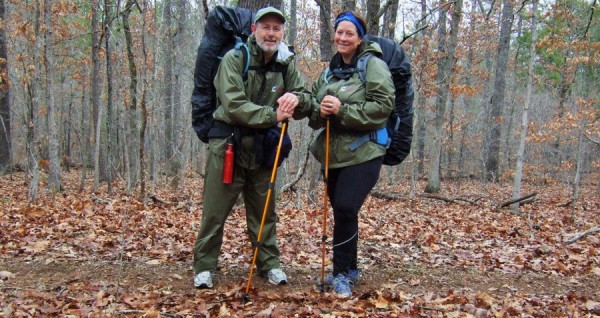 Ginger doesn’t like this picture; “look at all the gear and clothes” Well it was only our second trip and we soon learned to cut down.

The van was where we left it (always a worry). It was just a matter of dropping our packs in the back and heading off to Ginger’s parents, a nice dinner, pick up the girls and head back to Springfield so that they could be home in good time for school Tuesday (Monday was a school holiday). 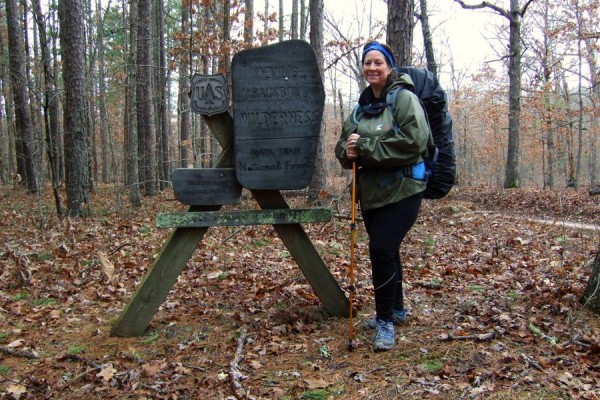 In total we’d hiked around 12.5 miles in a little over two and a half days.