The kids were with their dad in Chicago. The forecast was for unseasonably warm temperatures. We had backpacking gear we’d not fully tried out yet. It had been nearly six weeks since our last camping trip. It was time. We were ready to go on our first backpacking trip! 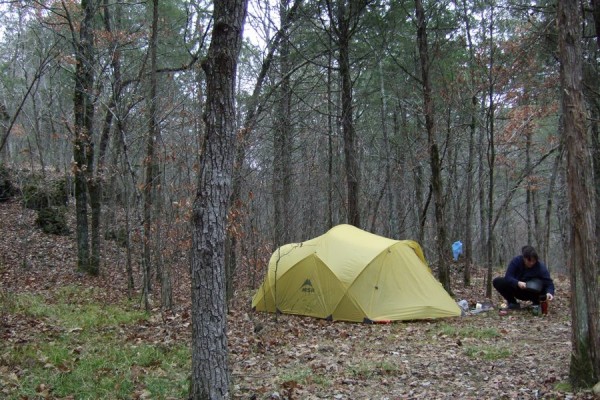 We couldn’t leave home until UPS brought us our new sleeping bags. The delivery did not arrive until 6:30pm and that meant we didn’t actually get on the road until 7:30pm. It would take a 90 minute drive to get to our destination; we’d decided to go to Hercules Glades Wilderness for this trip and make camp just down the hill from the trail head and parking lot. So that meant we’d be attempting our very first backpacking trip…

our very first time carrying packs… in the winter and in the dark. We do like a challenge, apparently.
We arrived with little incident and parked the van at the Coy Bald Trail Head. There was one car there already, music playing and engine on. This remote area was obviously a “drink beer and make-out point”.

We donned our packs, coats, gloves and headlamps and headed into the wilds. Signing in at the trail head showed us that no other campers had been this way for several weeks. (Or they’d not signed in…more likely.) Off we headed down the trail. It’s about a 200ft descent from the parking lot to the creek bed. There’s a fire ring and area that’s quite well used just the other side of Long Creek, that we’d seen on an earlier day hike.


Finding a clear space to put the tent wasn’t difficult, finding a suitable tree to hang the food bag from was.
We had no trouble setting up camp in the dark and had soon fixed dinner. By 10:30 we were pretty tired and went to bed, eager to give our new bags a try. 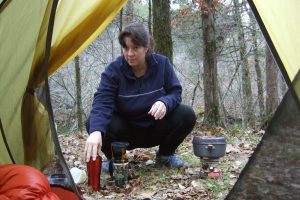 The bags did well…we were warm and cozy. We woke to a cloudy morning that felt more chilly than it was…likely around 50°F. Coffee, breakfast, breaking down the camp, and pumping some water…soon it was nearly noon and we had a full day’s hike ahead. But before we left the area, we had a nose around Devil’s Den, an interesting little creek bed flanked by steep hills on both sides. 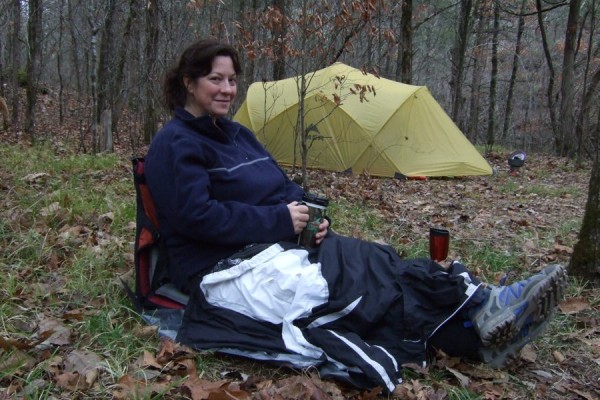 Morning coffee in style. Ginger takes advantage of her Therm-a-rest chair. I just sat on some rocks! 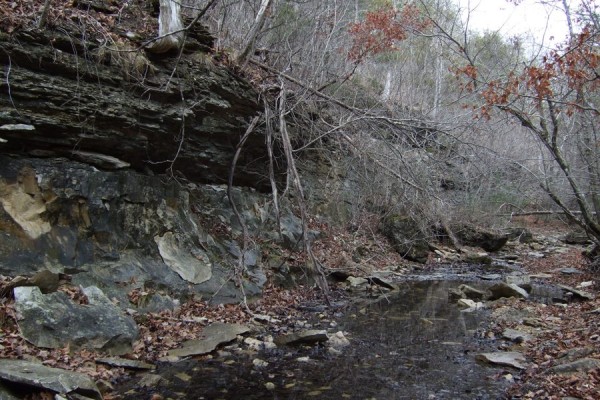 After breaking camp we dumped our packs and explored a creek bed that runs up into the rather ominously named Devils Den. The geology is quite striking with the highly layered rock on top of a thick un-layered base.

The Rock Spring Trail starts off with an immediate climb of 240 ft.
Of course by this time the sun had come out and the temperature had risen to the mid 60’s. Combine this activity, the weather, and thermal fleece base layers, and we were sweating profusely within minutes. I had to stop and catch my breath several times as I could feel my heart pounding hammers into my eardrums. Soon enough, though, the trail leveled out to woods of cedars and oaks. Interspersed with the trees are grassy areas of open glade. Maybe an hour later we began the descent to the next watering hole. Another 240ft down a rough and rock-strewn hill to the shut-ins on Long Creek.
sudden warm, humid weather caused condensation on the cold ground and this made the smooth rocks of the creek bed incredibly slippery and quite treacherous.
We found another path alongside the creek and made our way to the falls. At that point we had to decide if we would make camp there and then return the way we came the next day or continue along the loop today and hopefully find a place to camp sometime before dark. As neither of us was particularly tired, we opted to fix a quick lunch and continue onto the Coy Bald Trail. We also made sure to fill both hydration bladders as this was the only place with water for the next 24 hours or so. 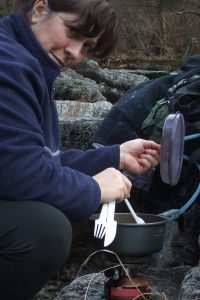 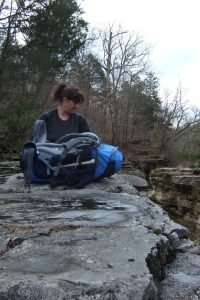 The falls are quite a popular camping area and we found two well-used fire rings.

Although the falls were gorgeous, the human debris and dust-strewn camping area left us longing for true outdoors wilderness.
We were eager to get moving. We found the trail and began a very steep ascent of  300 ft. By this time my leg muscles were really feeling the pull of lugging my body plus a 35lb pack up a steep hill. I felt like each step was a struggle as I physically pulled myself up. I knew I’d be feeling this the next day. 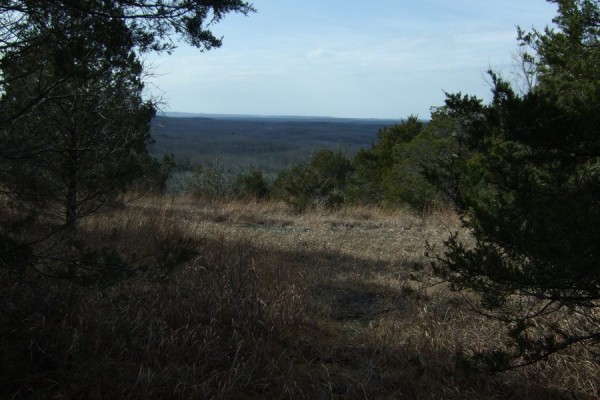 Soon we found ourselves in a clearing overlooking Blair Ridge. From this point you can see Hercules Tower several miles away. I want to camp here someday as the clearing faces south and I can just imagine drinking my coffee in the morning sun.

The forecast was for high winds and thunderstorms from the South so we knew we needed to be on the North side of a hill for protection from the elements.
Back over the ridge we went and found a nice clearing  just over the hill to the North. But what looks clear isn’t always a good site for a tent. The area is clear because trees can’t grow. Because it’s rocky. And you can’t pitch a tent on rocks! We then had a nose around in the woods just above the clearing and the soft ground seemed like it would work. In reality, the soft dirt is really just leaf litter and there is a rock shelf about 6″ down. So staking the tent wasn’t optimal. But we made it work. Soon it was dark and we holed up in our tent in our sleeping bags and Thermarest chairs and read our books with our headlamps.

We knew the forecast called for rain and possible thunderstorms so we weren’t surprised to be awakened by a thunderstorm at midnight. Try as we might, neither of us was able to stay awake for it, though. That’s pretty hard to believe because the rain made a terrible noise hitting the tent. But we were dry inside and slept until morning. 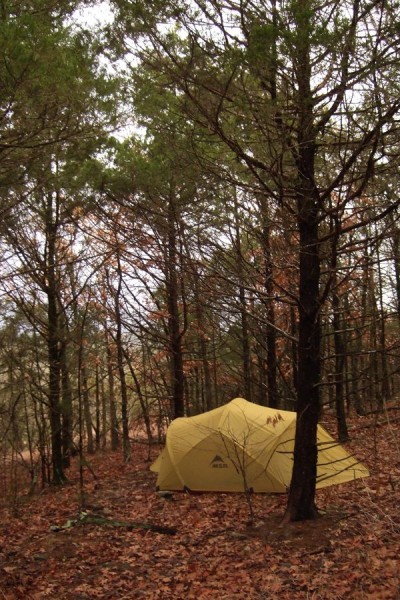 When we did wake up, we did a quick check of the tent and found only mild moisture, most likely from condensation against the cold floor of the tent. With an air temperature near 60°F on the last day of December this was to be expected. We then realized that the light coming into the tent was more yellow than usual. We have a yellow tent. So we expect this. But it looked…more yellow. I checked outside and the post-storm clouds were positively golden and the entire world was bathed in this spooky yellow light. We scrambled out for some pictures. And we retrieved our food from the tree where we had hung it. And made coffee. I love coffee when we’re camping!

A check of the weather radio revealed that the dark blue clouds to the north of us (with the constant rumble of thunder) held the potential for a  tornado. 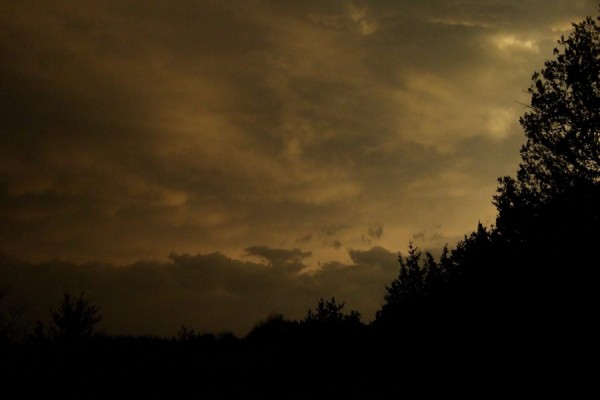 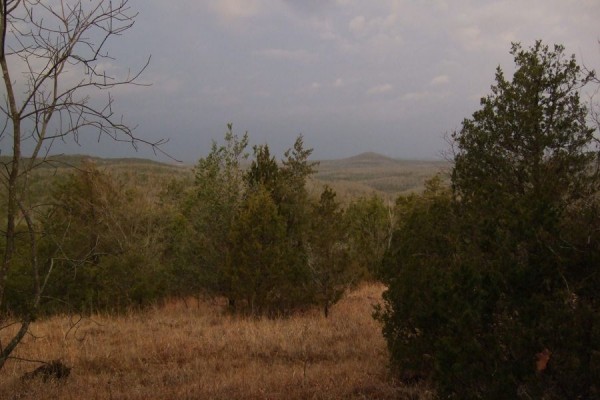 View to the North and Lower Pilot Knob

The radio was giving another warning as well, but I was not alarmed as it was down in Branson, 30 miles away. We continued to drink our coffee and watched the morning unfold. The rumbling continued. And then another tornado warning was issued. Apparently a tornado was spotted 4 miles from Taneyville. I then remembered the last town we had passed through on the way here.  Taneyville. The thought of being in a tornado in a tent in December was so funny to me that I just couldn’t be to worried. Plus the storm just didn’t “feel” tornado-ish. Soon enough the line of storms passed over (sans tornado) and we had another thunderstorm with some nice lightning and thunder at close range. Always exciting for storm lovers like us!

We found out later that we were quite a bit south of Taneyville and the dark clouds we saw to the north was most likely the tornado. 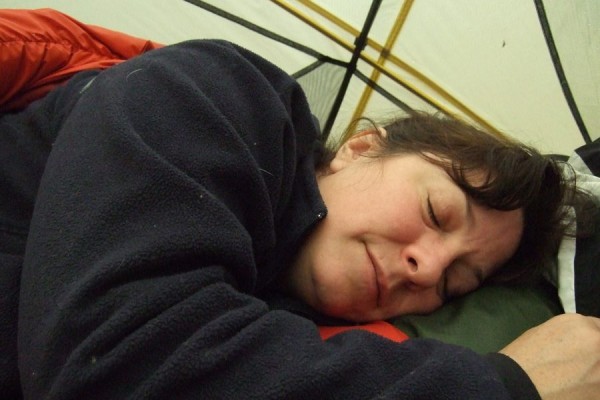 Passing time while the storm goes by 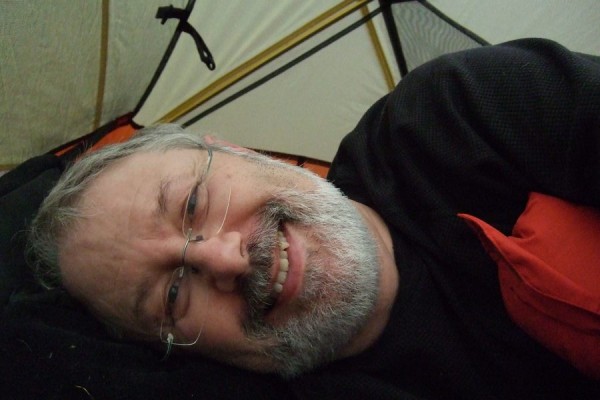 Gary waiting out the storm

When the storm passed we checked the sky and figured the clear blue meant the dry weather had moved in and we could safely pack up and head home.  As it had been raining, everything was in the tent or vestibules so we were able to pack up easily. We stuffed the sleeping bags into their compression sacks. We deflated and rolled up our sleeping pads. We changed into new clothes for the day. The only thing left was the tent…which we were sitting in of course. The entire area was dripping wet and we needed a dry place to sort our packs. 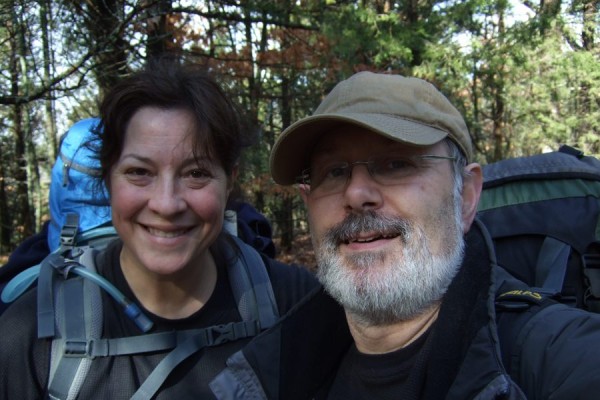 Back on the trail again 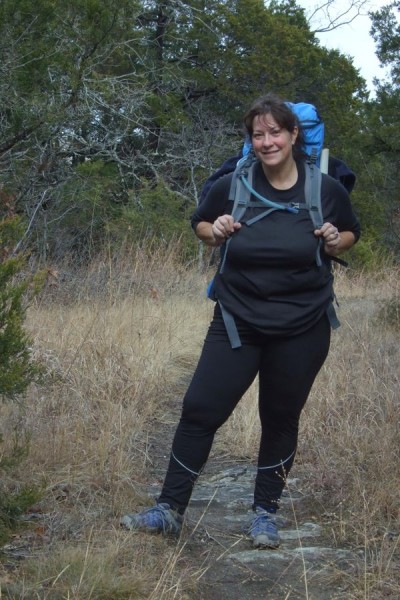 The hike back to the trail head, completing a 6.8 mile loop, moved along remarkably fast and we were finished by 1pm. I had been looking at a map, but Gary was stunned to see the sign-in kiosk at the trail head. He figured we still had another couple hours of hiking. I think we were both surprised at how easily we were able to hike this distance and how little time it took us. Maybe, just maybe, we’re getting stronger and all these day hikes are paying off! 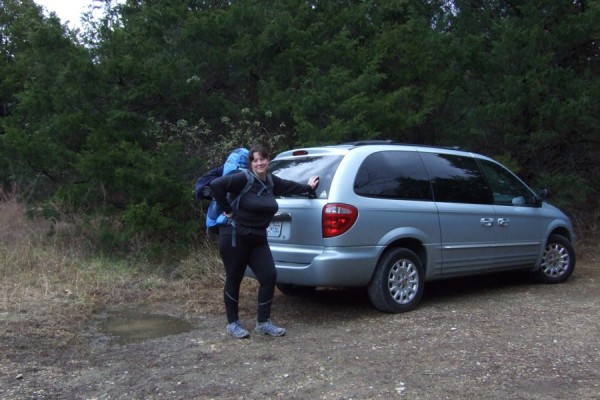 Ginger at the end of our Christmas break backpacking trip 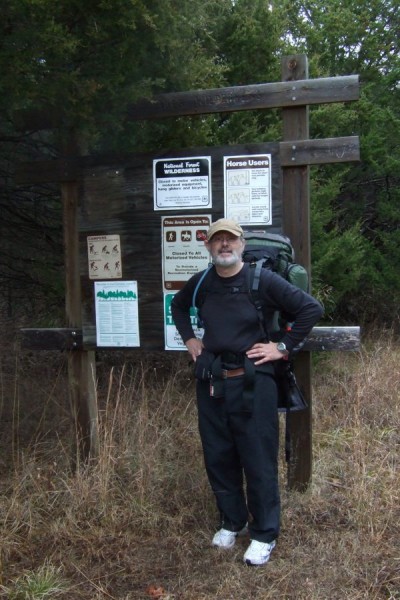 On our drive back to Springfield we took the long route home and checked out the other trail head at Hercules Glades. It showed much more signs of human use and in fact we saw a man get out of his jeep and throw some trash out over the roadway. He drove away before we could get a photo of his license plate as Gary had suggested.

Once in Springfield the main things on our minds were showers and food.

After eating nothing but beans and nuts for days we were both pretty eager for some carnivorous luxury, so we had a New Year’s Eve steak dinner.
It was awfully yummy.
See other posts about Hercules Glades Wilderness