The copperhead is a venomous snake and should be treated with caution. All the Ozarks venomous snakes are ‘pit vipers’ and can be recognised by the shape of their head and cat like eyes. A copperhead’s diet consists of mice, especially deer mice and voles. Copperheads also eat other rodents, such as house mice and young chipmunks.

The copperhead likes to live close to creeks, rivers, river backwaters and swamps. 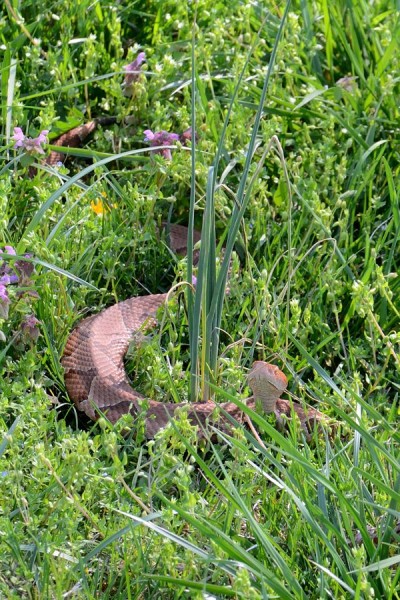 Lanie running off the trail almost stepped on this rather large and fat copperhead.

In 2012 a man died of a heart attack after being bitten by a copperhead. However to put the risk into context, there have only ever been two other recorded snake bite fatalities in Missouri. One in 1965 and one in 1933.

Please remember that it’s illegal to kill any snakes in Missouri, venomous or not.

You can read more about copperheads on the MDC website.