We’ve not been getting out enough of late so we grabbed a chance on Saturday to see some fall color and hike the Pees Hollow Trail at Hercules Glades Wilderness.

The Pees Hollow Trail runs north from the Hercules Tower Trailhead off of Highway 125. We hadn’t hiked this trail before and the only thing we’d been told about it was that there was a spring somewhere. We checked various maps but we couldn’t find any mention of a spring, so one of our goals for the day was to try and locate it. 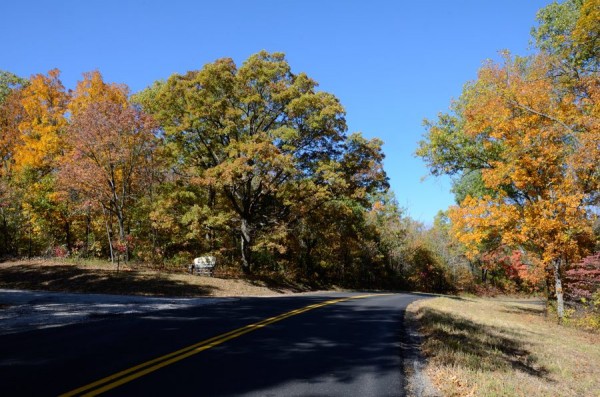 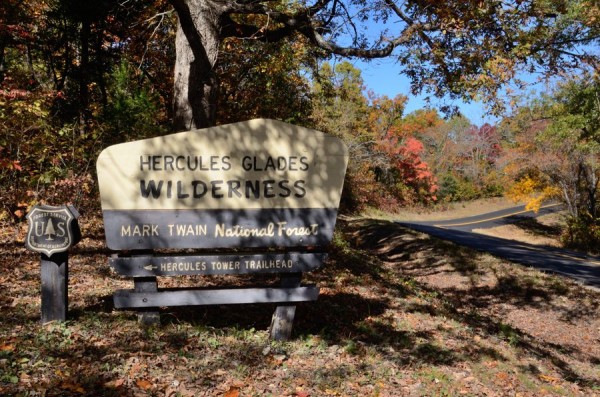 On paper the Pees Hollow Trail looked to be a 5.6 mile loop with around 500 ft. of elevation.

Don’t believe the US Forest Service web page for Hercules Glades. It refers to this as a 4 mile loop. The reality is a little different.

According to our GPS & Google Earth, we ended up hiking 6 miles and climbing 894 ft. of elevation.

The Tower Trailhead was very busy, with lots of horse trailers and smaller vehicles too. It was so full we had to park on the grass. 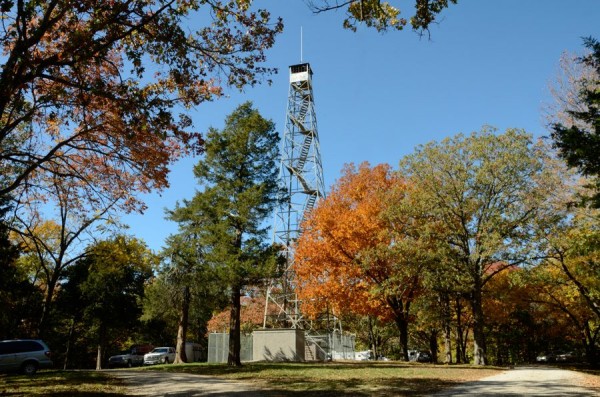 Tower at the Hercules Tower Trailhead. Unfortunately the tower isn’t open to visitors

These modern pre-cast concrete vault toilets are very good. This one is at the Tower Trailhead. 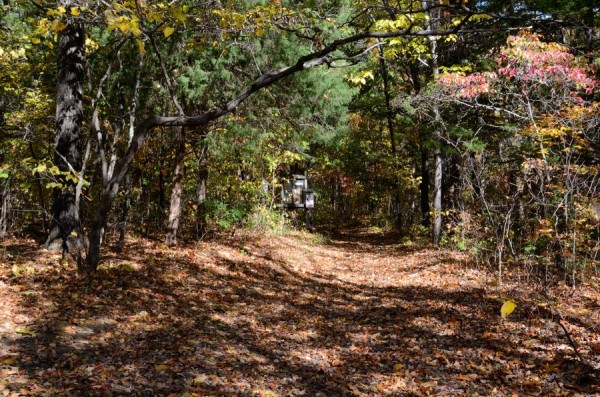 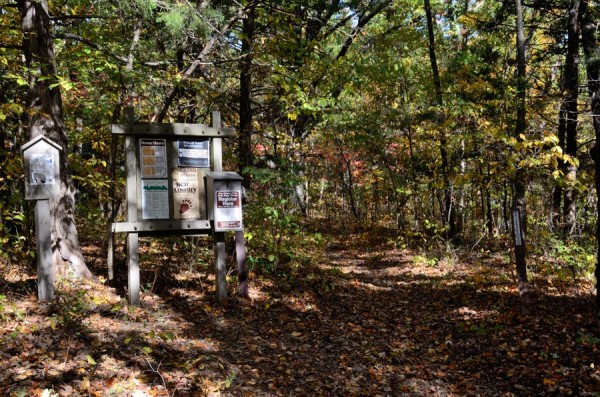 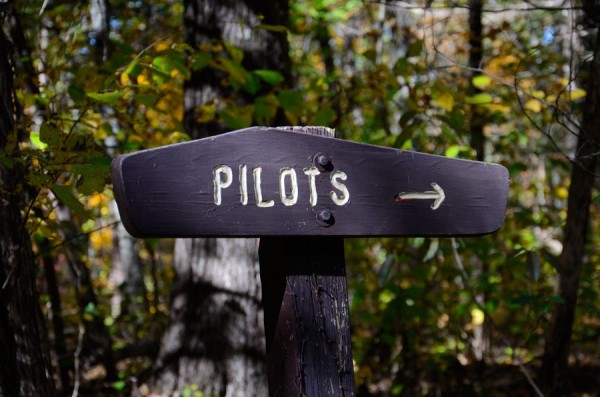 This sign for the pilots is right by the registration point at the Tower Trailhead. 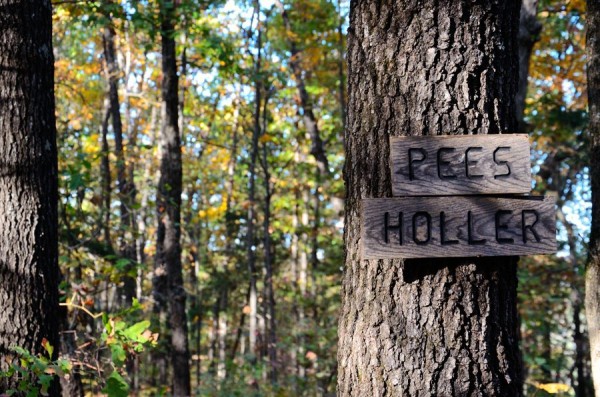 The start of the eastern side of the Pees Holler (sic) loop is clearly marked with a sign about 75 yards from the wilderness registration station just off the northern side of the trailhead parking lot.

The start of the western side of the loop isn’t marked, and is therefore much harder to spot. It’s about 250 yards further down the trail.
Keep an eye out in the brush to the north of the trail at this point and you can spot some building remains and signs of an old campground. 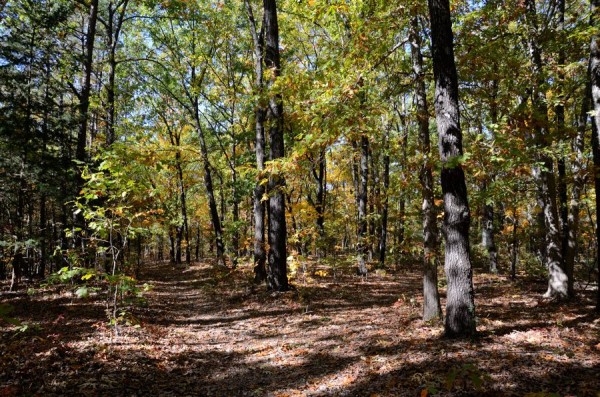 The pilot's Trail goes straight ahead the start of the Pees Hollow Trail (on the right) is quite difficult to see. It'll be even harder when more leaves start to fall

The first two thirds of the western half of the loop has much steeper gradients than the eastern side, it also has fewer glades and is more wooded. We discovered that the trail doesn’t follow the hill contours as shown in the brochure. Instead at one spot it climbs steeply up the side of a ridge and then follows the ridge down. Off the ridge the ground looks to to be level and clear in places offering the chance of some good wild campsites. Near the trail we found a healthy looking stock pond that’s not marked on any of the official maps. 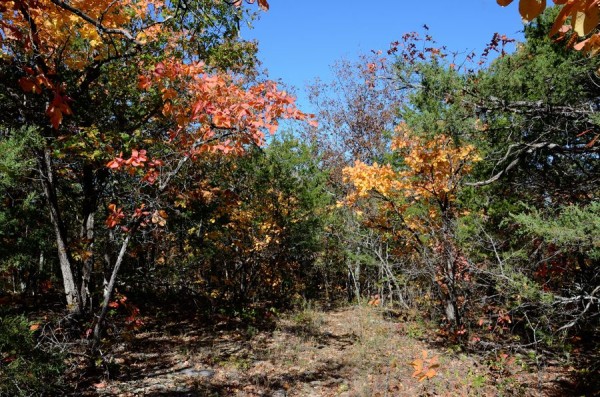 It doesn't look like the west side of the Pees Hollow loop is hiked as much as the east side. The trail is quite difficult to follow in places 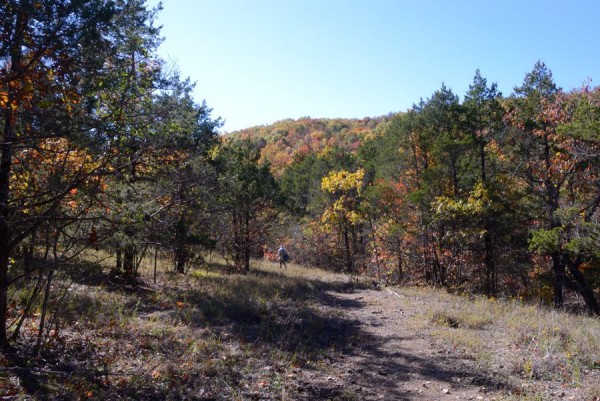 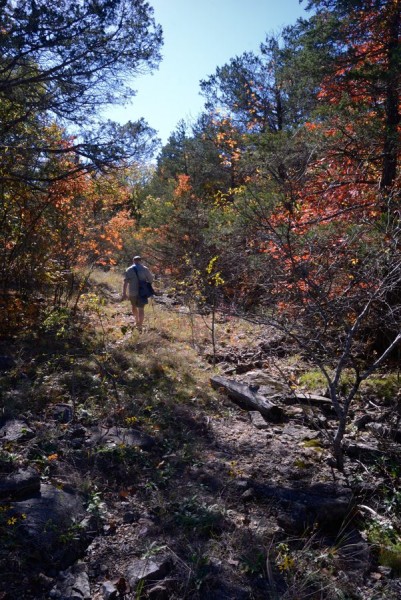 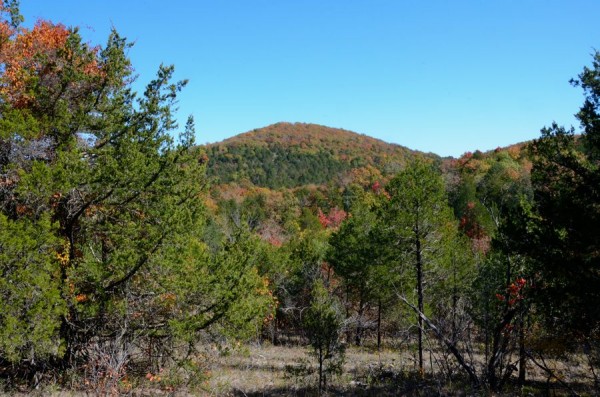 Once down the ridge and onto the glades there are views of several near-by knobs. 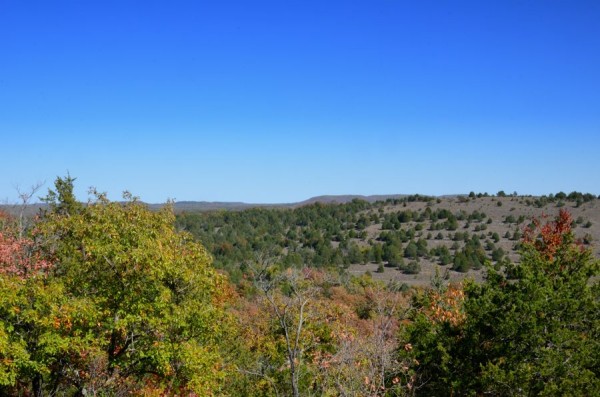 The east side of Pees Hollow has a lot of open glades. The main trail doesn't go near these 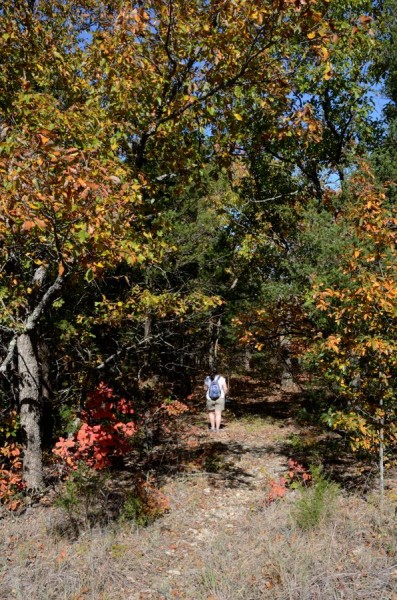 Ginger on the Pees Hollow Trail

The Pees Hollow Trail doesn’t appear to be as popular with hikers as the other trails in Hercules Glades, and the western side even less so. Which means that the trail isn’t used as much making it difficult to follow in places, especially in the woodland. Once fall is in full swing and the ground is completely covered in leaves this is going to be a tricky trail to follow. The ridge ends at a very pretty creek with small falls. Exploring upstream the creek dried up after a couple of hundred yards, which makes us think this may be the location of the spring we’d been told about. 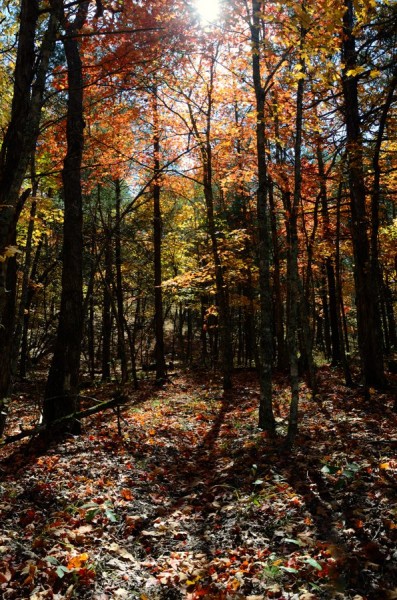 The west side of the loop meets with a creek. There's a small trail going west, which we followed for a short while. 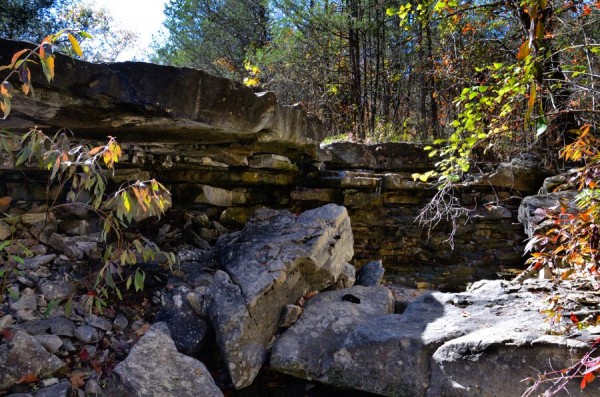 A few yards along from the creek we came across an old truck cab which had been extensively used for the usual Ozarks occupation of target practice.
There was no indication of where rest of the truck might be, or how this bit got there. 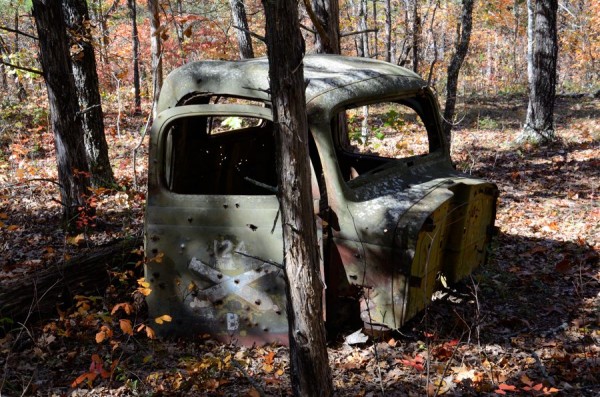 In the Ozarks anything metal's fair game for target practice. This ex-truck looked like it may have had a military background. We saw no other parts of it in the area, just this cab. I wonder what happened to the rest of it.

In the Ozarks anything metal’s fair game for target practice.

Not a very tight pattern

The remaining bit of western half of the trail is a combination of woodland and overgrown lowland, the vegetation encroaches on the trail quite a lot, another indication that the trail isn’t used much.

There is a crossing of the creek running out of Pees Hollow, which is a jumble of rocks and it looks like it could be quite difficult when there’s water running.
It was dry when we went through.

The western half of the trail ends at the crossing of Brushy Creek. We know it’s called Brushy Creek because someone has kindly put up a sign. 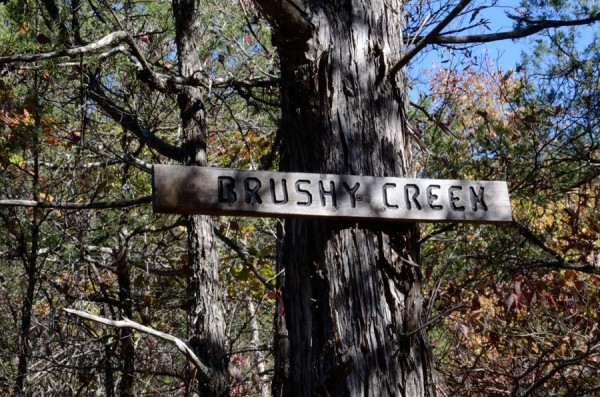 It must be Brushy Creek because the sign says so - though the map tends to disagree, and this is just one of many feeder creeks into Brushy Creek.

Here we almost lost the trail. Distracted by taking pictures of a garter snake,
we went straight on a short way only to find the trail petered out. Back-tracking to the Brushy Creek sign we noticed that the trail doglegged right across the creek. It’s very jumbled and confused here and the trail across the creek bed isn’t particularly clear. There was a trickle of water running in Brushy Creek and we found a nice small pool just off the trail for us to cool our feet in while we ate lunch. 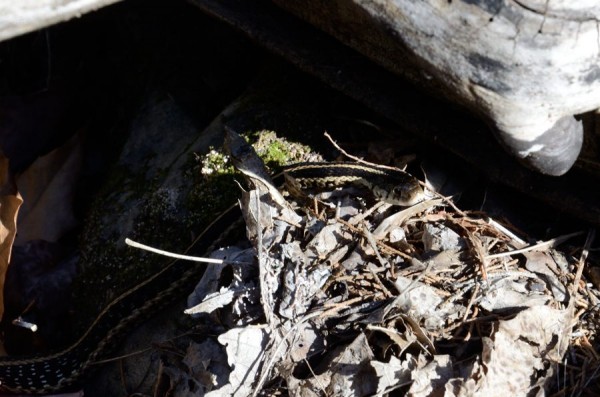 Leading away from Brushy Creek the first part of the eastern half of the trail was obviously once a farm track. Once up on the glades the track is fairly easy to follow but there are a number of tracks joining and crossing the main trail. Along this part of trail we found an old set of gateposts – very Ozark in construction and

in some brush to the side of the trail we found the hood and front fender of an old dodge truck.
Again there was no other parts around and no indication of how it might have got there. 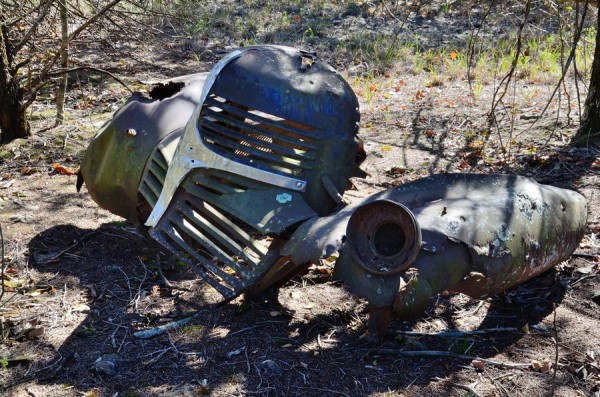 There is one stock pond marked on the map. It was dry and looked like it had filled in. While you are here, check on the opposite side of the trail.

We saw what we thought was a sinkhole, but on closer inspection we discovered it was the basement of a stone building. 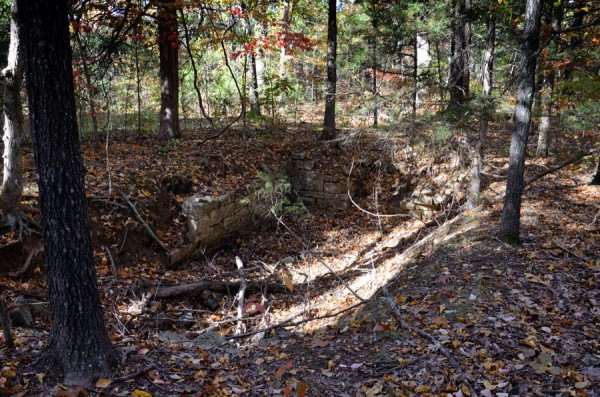 From the trail we thought this was a sink hole. When we looked more closely we found out it was a dugout cellar with stone walls.

While hiking the eastern side of the trail you need to keep an eye on the map to make sure you don’t accidentally follow one of the many crossing and intersecting trails. One point in particular threw me.

The trail appeared to go straight on when in fact it turns to the left.
Had we carried straight on we would have walked around a knob until we ended up going back the direction we had come (north) only this time along the ridge to the east of Pees Hollow. We wouldn’t have been the first to make that mistake, as I’ve seen from the GPS track of at least one other hiker. 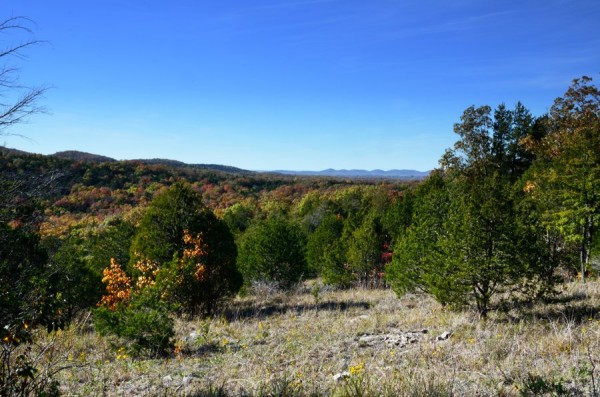 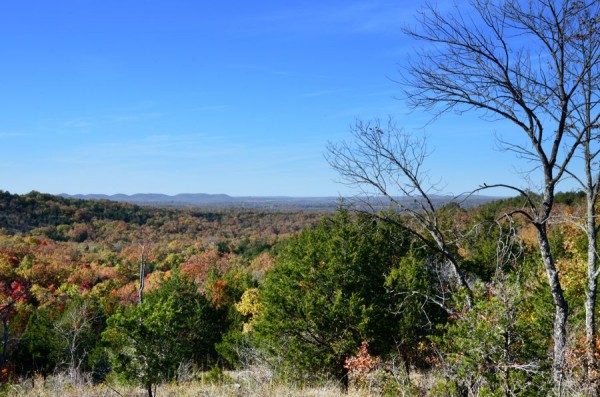 View to the north west from the easter side of the Pees Hollow Trail Loop. 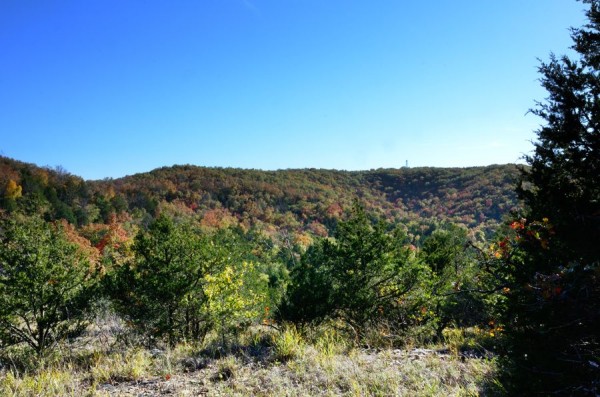 Hercules Tower in the distance - seen from the eastern side of the Pees Hollow trail.

The last part of the trail runs through woodland very near and parallel to Highway 125. The trail ends with a short but fairly steep climb up to the end of Pees Hollow. The late afternoon sun in the fall colored trees provided lots of pretty photographic distractions.

Overall the trail was fairly easy to hike, with the only problems being following the trail in places and dealing with the overgrown vegetation in the lowland areas. After heavy rains the lowland areas are going to be muddy and the creek may be dangerous to cross – though I’d love to see the falls on the creek on the western side when the creek is in full flow. 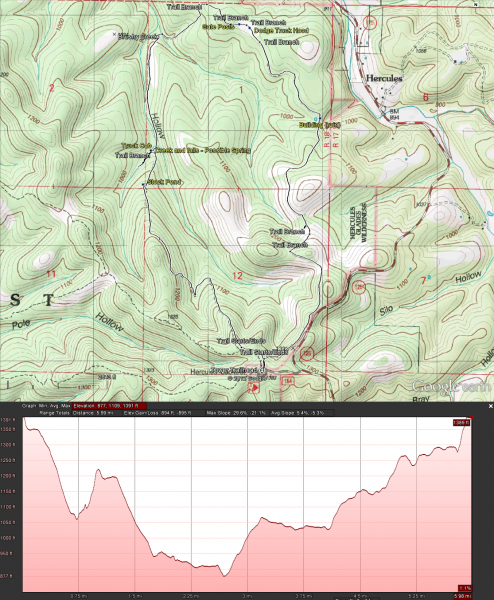 Map and elevation chart of our route on the Pees Hollow Trail , Hercules Glades Wilderness. Topo Map provided by USGS.