This was our first ever camping trip and the catalyst for our love of outdoors recreation in the Ozarks. 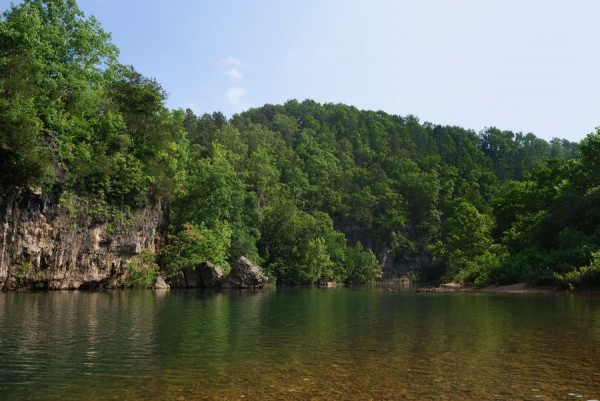 Our Friends Tom and Rebbie invited us to join them, their son Dash and his Fiancée Leslie, canoeing and camping Memorial weekend. Needless to say we jumped at the opportunity, and immediately made arrangements with the grandparents to take the kids. With climbing temperatures it looked like this was going to be an ideal time for us to have our first try at camping together and my first camping trip in over 40 years. In the preceding week we unpacked the tent, airbeds and sleeping bags from the shed and I found time to be distracted in Walmart and buy some more fishing lures.

There was even more good news when the grandparents volunteered to come into Springfield to collect the kids. This freed us up to set off to the campsite in convoy with Tom and Rebbie who turned up at our place at the allotted time Friday afternoon. Their pick-up truck had a canoe of gargantuan proportions in tow and they also brought along Cocoa, aka DBD – ‘Damn Brown Dog’ their chocolate Labrador, a dog for whom the term vacuous must have been invented. Unfortunately, whatever DBG lacks in the brain department she more than makes up for in unbounded enthusiasm. Without more ado, we hit the road. As I’ve discovered, one can’t do anything in the US without traveling miles and miles.

Just under a couple of hours later we had driven the hundred plus miles to Mountain View. Here Tom made a stop to fill the cooler with ice and at Ginger’s insistence we made an unplanned stop at Walmart so I could buy a couple of cheap camping chairs to replace the pair I had inadvertently left standing in the garage. Next stop was Blue Spring Campground, which involved a few more miles on the highway followed by several miles on a gravel track. Dash and Leslie had arrived earlier in the week to secure a campsite and even though they couldn’t get their preferred site at the top of the campground, got the lower site which I now think is the best site at blue spring; it’s relatively secluded and has its own access to Jacks Fork River, but it doesn’t have as much camping space as the top site. 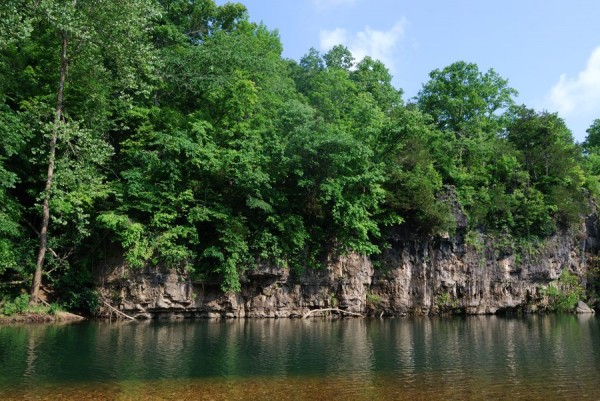 Another view of the swimming hole and bluff at the Blue Spring Campground on the Ozark National Scenic Riverway.

The river and swimming hole at Blue Spring are very beautiful with bluffs about 70′ high surrounded by hills probably twice that. The only disadvantage is that the swimming hole is a popular spot with the locals, can get a bit rowdy, and we’re not talking about gentle Church folk either.

We got the tent set up without too much trouble, Tom lent us a couple of tarps, one to act as a groundsheet and another to sling over the tent in case of rain. That night we ate well and drank far too much sitting talking into the small hours under Dash and Leslie’s Gazebo. It was also the night of the ‘Giant Insects’ A huge fly initially alighted on Rebbie’s leg, and quickly thereafter took up a prime position on my neck and proceeded to climb over my head. The thing was HUGE, and they made me stand still so they could all take pictures of this giant beast which may well have had the ability to drop an elephant at a single bite. It was that big! It turns out is was fairly harmless Dobsonfly but…

Would you stand around and let this thing crawl over your neck and head? Dobsonfly.

Saturday after a slow start we loaded up the three canoes onto the trailer; Dash and Leslie had borrowed a couple of canoes from Leslie’s family who live somewhere nearby. We didn’t pack food or water as we planned a short 2 hour float down to our campsite from the highway 17 bridge put in on Jacks Fork. Ginger and I traveled in style in the pick-up while Dash and Leslie sat out in the back.

Things did not go quite to plan. We’d already noticed canoe rental companies putting people in at Blue Spring and not thought much of it. When we got to the Highway 17 put-in we found out why. The place was throbbing. There were a couple (or more) school buses blocking the access and a corresponding number of adults, canoes and children milling around. Not only was it going to an age to get onto the river, but most likely we’d have to spend the afternoon in the company of the floating hordes.

Tom being a local lad knew of another put-in point further up river. The problem was that we couldn’t go forward as the way was blocked by the buses and others waiting to put in. After ‘some debate’ Tom got the most agitated I’ve seen him and proceeded to perform one of the best bits of driving it’s been my pleasure to witness, he reversed the pick-up and trailer about a quarter mile back up the single track gravel road, apparently oblivious to the significant drop offs on either side of the track and the other vehicles he had to drive around.

There followed a confusing drive across the countryside before we arrived at a small bridge where we had to lower the canoes off the back of the trailer and onto a small shingle beach. Finally we were ready to go floating. It seems it didn’t occur to any of us that we’d not come prepared for an extended float, and we set off for what ended up as a very good float. Albeit a somewhat hungry and thirsty one. 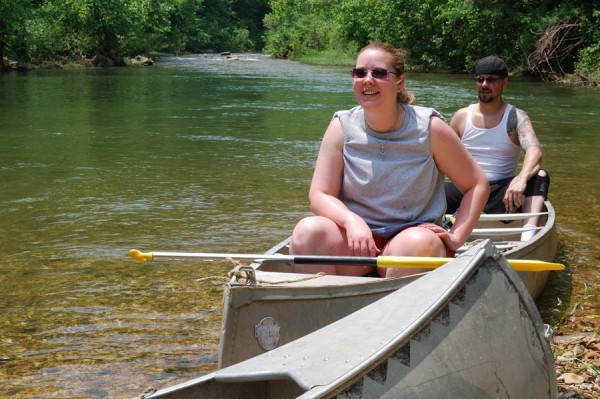 Leslie and Dash look on while we empty our canoe after taking on a bit of water at a fast ‘riffle’. Zip lock bags obviously keep water out of cameras.

The borrowed canoe we had was aluminium, very pointy, and narrow. Much more unstable than the big wide canoes we’d hired for previous float trips. Our inexperienced wobbling and steering was most disconcerting. The first big little riffle we hit, we had a spot of bother and ended up with a canoe with a lot of water sloshing around in it. I am happy to report that in extremis a camera will survive immersion in water in a zip-lock bag. It was probably also in this incident that I managed to break the tip of one of my fishing rods, though the damage didn’t come to light until later in the day when I made a cast and the end fell off…

The scenery was wonderful, and one of the most fascinated sights were the many neat circles of cleared gravel which we could see as we floated over them. The circles were formed by perch minding their nests. Other entertainment was provided by DBD who had only learned how to swim last year, and on this occasion, much to Tom and Rebbie’s consternation, Dash encouraged and taught her how to get out of, and into a floating canoe. We also discovered that DBD hadn’t really learned how to swim properly. She had a very unusual swimming style. She’d tuck her back legs up and only use her front paws for propulsion. 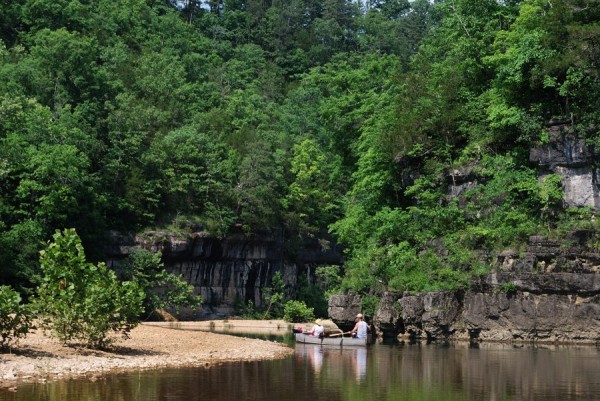 Tom and Rebbie negotiate their supertanker sized canoe around a bend on Jacks Fork river, the Ozark National Scenic Riverway. Damn Brown Dog must be keeping her head down 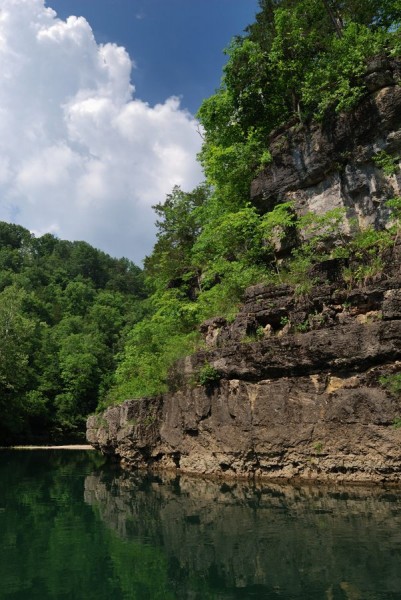 As we floated through each pool we stopped to fish. I think my count for the entire trip was one small perch.

Look! I caught a fish. 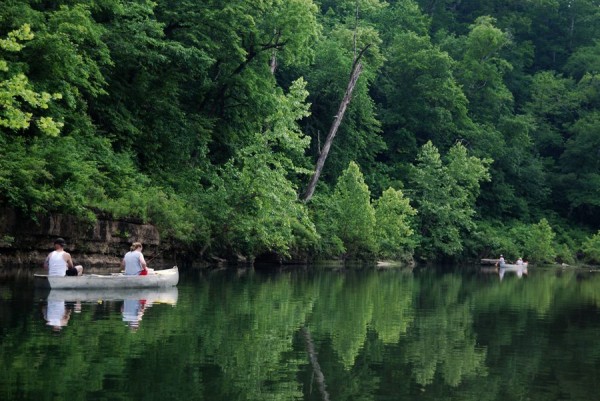 Dash & Leslie and Tom & Rebbie fishing at one of the many pools on Jacks Fork river, the Ozark National Scenic Riverway.

Finally at around five or six pm, five hours after putting in, we got to the take out point. We’d already made arrangements for one of Leslie’s relatives to pick up Tom and ferry him back to the pick-up. Tom and Dash went off to collect the truck, and in due course we got back to camp, where again much food and drink were consumed. DBD was so tired from her swimming and canoe boarding escapades that she just laid on her side and only drank her water, lying down, when her bowl was stuck under her nose.

Sunday Tom and Rebbie, Dash and Leslie had other plans and so broke camp and left us in the morning. We didn’t need to pick up the kids until Monday evening, so we stayed on for our first bit of solo camping. We had a quiet day, I fished in the swimming hole and managed to catch a couple of small perch and Ginger read. 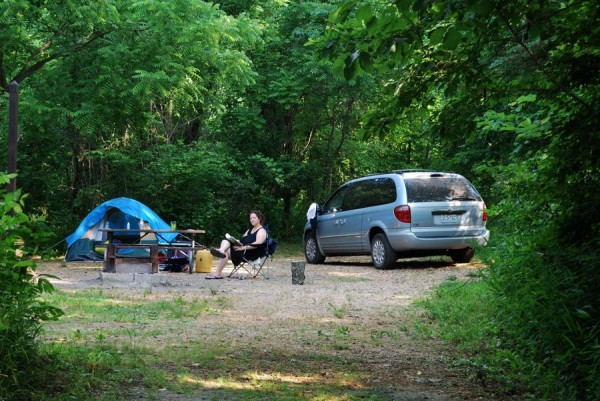 Ginger at our campsite at Blue Spring

Monday, we sat around, and I did a bit of fishing until impending rain persuaded us it was time to pack up and go. On our way out we checked on the two campsites at the near-by Baptizing hole. We had to drive home via Ginger’s parents to pick up the kids, making the the homeward trip about 150 miles. 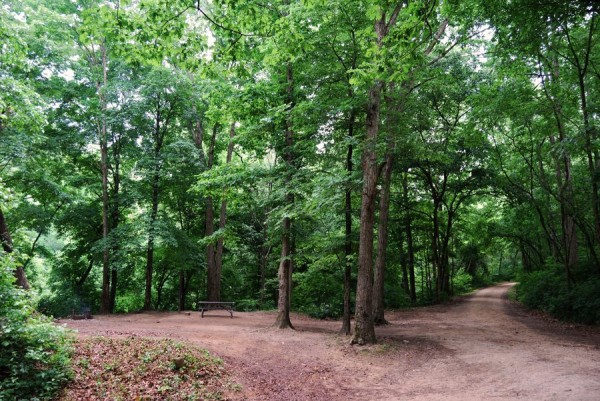 Unoccupied campsites at the ‘Baptizing Hole’

Originally posted in Breakfast in America