We enjoyed our Memorial weekend camping so much, we decided to get set up properly for camping. As two of the kids are willing to give camping a try, that left us with an accommodation problem. So we bought another tent.

We picked the Coleman Sunlight Ridge tent, based on price and size. It’s big enough for us to stand up and move around in, but not too big to make finding a site difficult. The price (Just $79 – 2010) makes it almost a throwaway item at the end of the camping season. This was ideal as we had only just started camping and we may not have wanted to go too often.

As it turned out we spent 18 nights in this tent in 2010, and it worked very well for us. We still have it (2012) and use it for the kids and guests when car camping. The tent fabric and tub floor has proved to be hard wearing. We re-sealed all the seams, though we only had minor problems with the low flap seam at the back of the tent. We’ve used it with and without the flysheet set. Ventilation with the fly set it is very good as there is large opening at the back which lets the air flow through. We use a cheap tarp under the tent to protect it from sharp stones and sticks. We marked the tarp with a sharpie so it’s very quick and easy to fold to the tent’s shape.

Dry run for our new tent in the front yard.

The manufacturer’s ten-minute set-up claim is spot-on, provided we follow the instructions that is. Sliding the poles through the sleeves needs some care, if you rush it I can see how it might be possible to tear the fabric. We’ve not had any problems though, take it easy – it doesn’t take long. I like the way the tent poles fit onto pins attached to the tent. Very simple and very effective.

It always pays to check what’s happening behind you when you take a self-portrait. Ginger doesn’t appear to be taking this photographic record thingy quite as seriously as I tend to, and that’s just as well…

Before we took the kids with us we went on a couple of trips by ourselves so that everything was sorted out making it a pleasant rather than stressful experience for us all. We’ve already started sorting our things into plastic bins to make loading and storing the camping gear easier.  Hopefully, it also means we won’t forget too many things.

The gazebo proved so useful on Memorial weekend we decided we’d get one too, we thought it would be ideal for providing shade and shelter.

The Gazebo took longer to set up than the tent. It was easy to get the hang of it with practice. This has proved very useful, as we also have used it for barbecues at home and we’ve taken it to church events. 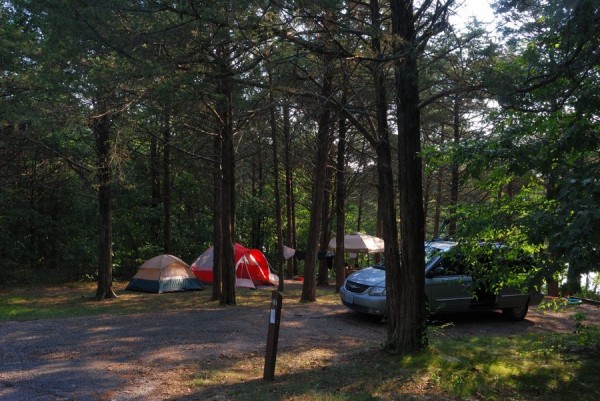 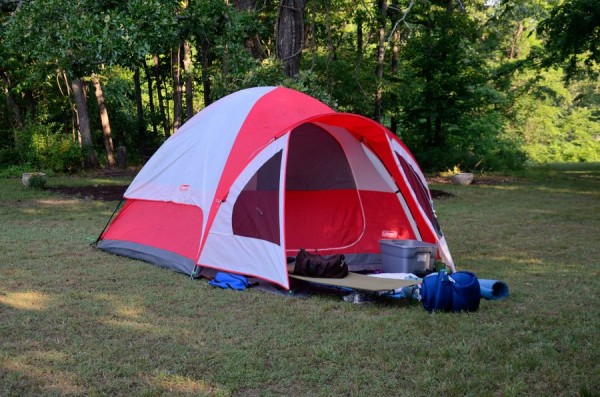 We think the Coleman Sunlight Ridge is still stocked by Wal-Mart, but Coleman are no longer selling it – we can’t find it listed on Amazon. If you know different, let us know. The nearest equivalent we’ve found on Amazon is the Coleman Evanston 6 Tent, which is currently selling for around $114 (2018). You can find it here.

This post was originally published in Breakfast in America. Updated August 2012, December 2018.