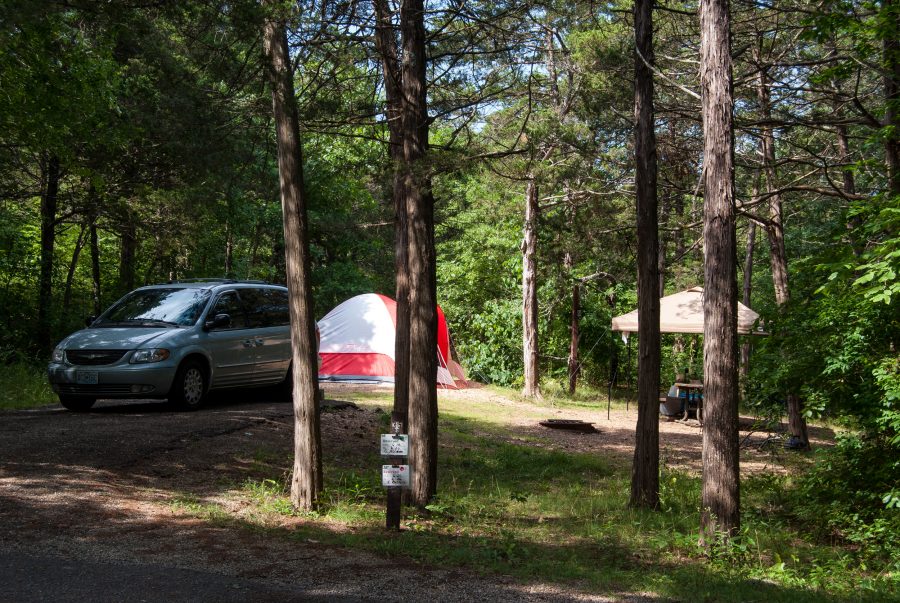 We decided to go camping and try out our new tent for the first time.

If all went well we’d take Alek and Lanie camping for a couple of days at Blue Spring.

Ginger and I spent a lot of time searching the Internet for good campsites. It wasn’t easy, we couldn’t find any central register of sites. In the end we found what we needed by trawling through several sources: State Parks, Corps of Engineers and the National Forest. State Parks are far too organised for our liking. They provide showers, manicured grass and a very orderly camping experience. All the pitches are very close to each other, they tend to have little of no screening and are very busy. Not our idea of a good campsite. We were looking for a sites that are well screened and quiet. We want to feel like we’re the only people there.

Ginger finally found what looked from Google maps to be an ideal campground near Shell Knob, at the Big Bay Recreation Area on Table Rock Lake. It’s part of the Mark Twain National Forrest, and we could reserve a site on the Internet. I liked the look of it because I’ve already been to Shell Knob so I at least knew how top get there, and the lake offered an opportunity to cool off in the and the possibility of some fishing. The only draw-back with the campground was that we we had to get Lanie and Katie to their Grandparents first, 80 miles in the opposite direction!

It would have been a lot easier if we could have left early in the day to drop off the girls, but we had to wait for Katie to finish summer school first, so we didn’t leave until the middle of the afternoon. We decided to leave Alek home alone for two days and see how he got along. At 16 coming on 17 he was old enough to be left. Whether he would be responsible enough would be seen.

Life would also have been a lot more pleasant if the car’s air conditioning hadn’t packed up back in May. The temperatures were now consistently in the nineties and getting higher making the 160 mile trip from home to the campsite via Ginger’s parents’ hot. 160 miles is a long way to travel when you realise that the campsite is only 60 miles from home. It was worth it though, firstly to get some time to ourselves, and secondly the campsite we’d picked was fantastic.

We managed to get the tent and gazebo set up without problems, but supper, cooked over the fire, took an age. Our first night in our new tent passed without incident and we spent the next day sitting by the lake reading and fishing. The water was far too hot for the fish to be biting, but I didn’t let that put me off, and I spent a lot of the time fishing with the water up to my chest.

The view towards our campsite from halfway down the hill to the lakeside.

The view towards the lake from halfway down the hill from our campsite.

Come the evening some heavy clouds started coming over. Before the trip we had bought an NOAA weather radio. These are very clever things that enable you to obtain local weather forecasts twenty four hours a day. The radio also provides a weather and emergency alert system, which turns the radio on and announces any dangerous weather. Having listened to the forecast we knew thunderstorms were likely, and once it started raining we covered up the firewood the best we could – making a note to bring a tarp for the purpose in future, and retreated to the tent. It then proceeded to rain hard, about an inch an hour for two hours.

Shortly after we got to the tent we heard a strange noise, which after a few moments of puzzling we realised was the weather alarm going off. I’d left the radio in the gazebo but the alarm was loud enough for us to hear 30 feet away in a heavy rainstorm. There was a severe thunderstorm warning with gusty winds. That was followed by several flood warnings. We were fine in the tent which was watertight, except along a back seem which was seeping some water. We fixed this easily later by sealing all along the seam. We did wonder how Alek as getting along (fine as it turned out) as we heard reports of heavy flooding in Springfield. 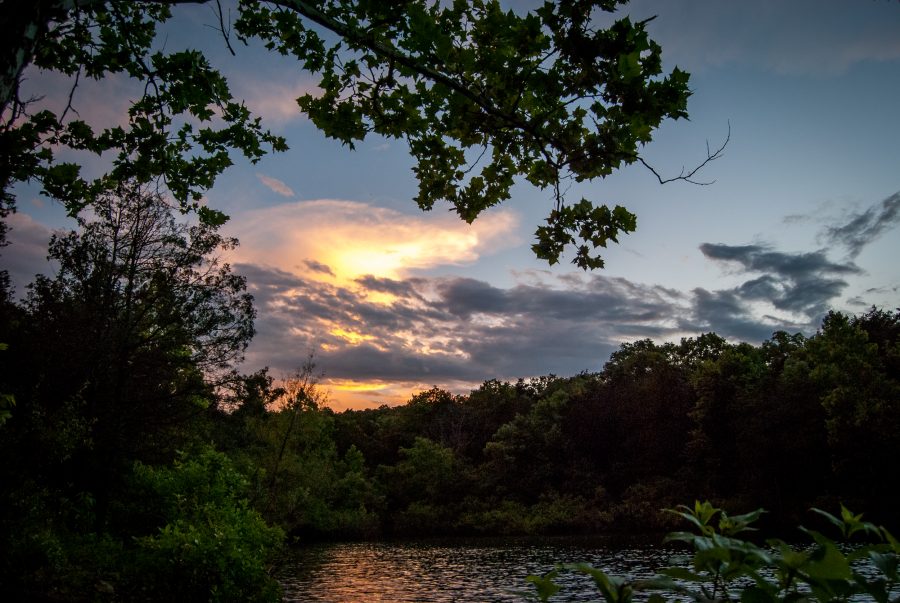 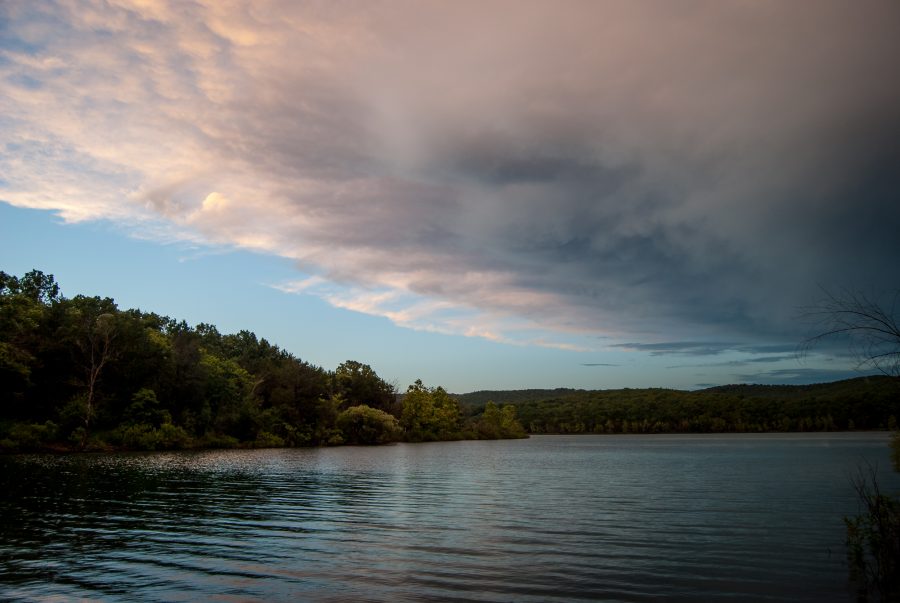 A set of massive thunderstorms swept through the area. It was a good test of the tent too, with one-and-a-half inches of rain.

Once the storm was over we were treated to a very nice double rainbow and some spectacular clouds. Dinner had been delayed by the storm and the fire slow to start because of the damp. We finally ate quite late. 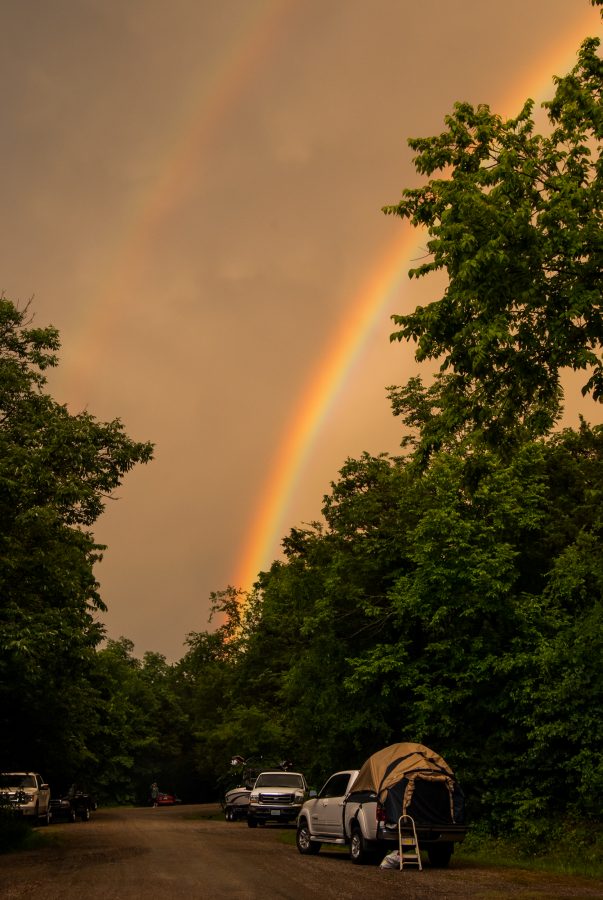 Ginger decided to get me up at around six am on my birthday. I couldn’t complain though, because it was a wonderful dawn, there was mist and a wonderful golden light. We went down to the lakeside and I got some pictures of the dawn and of some anglers in their boat in the mist. The rest of the day was spent relaxing, fishing and floating in the lake. What better way to spend a day? 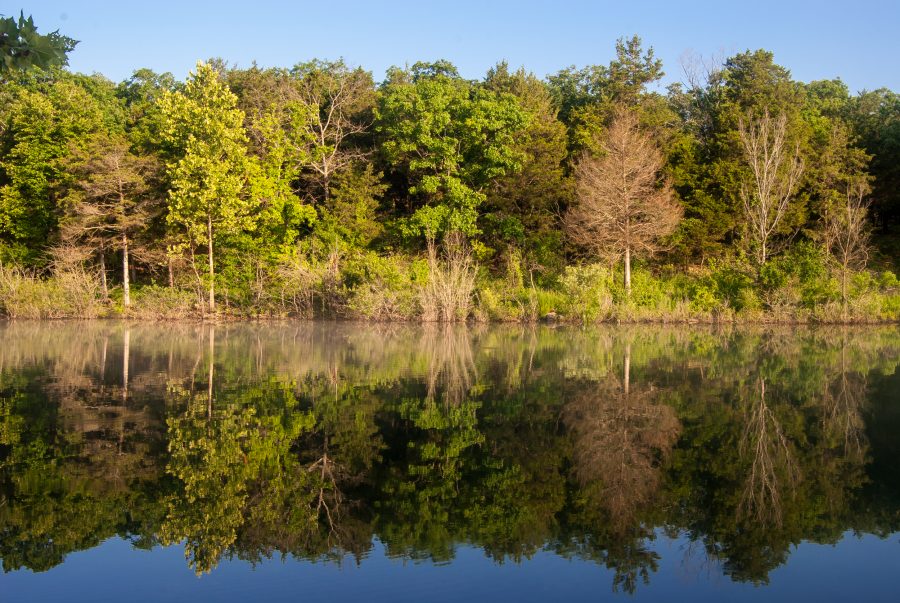 We’d had a great time. The tent had come through a major rain storm with just some minor leaks, all the camping gear seemed to work, all our careful packing seemed to be okay. We had some problems with the cooking, but reckoned we knew where we were going wrong. All in all the trip was a success. We packed up camp in the afternoon and headed back home to re-group before heading off for another couple of days camping. This time taking Alek and Lanie with us.