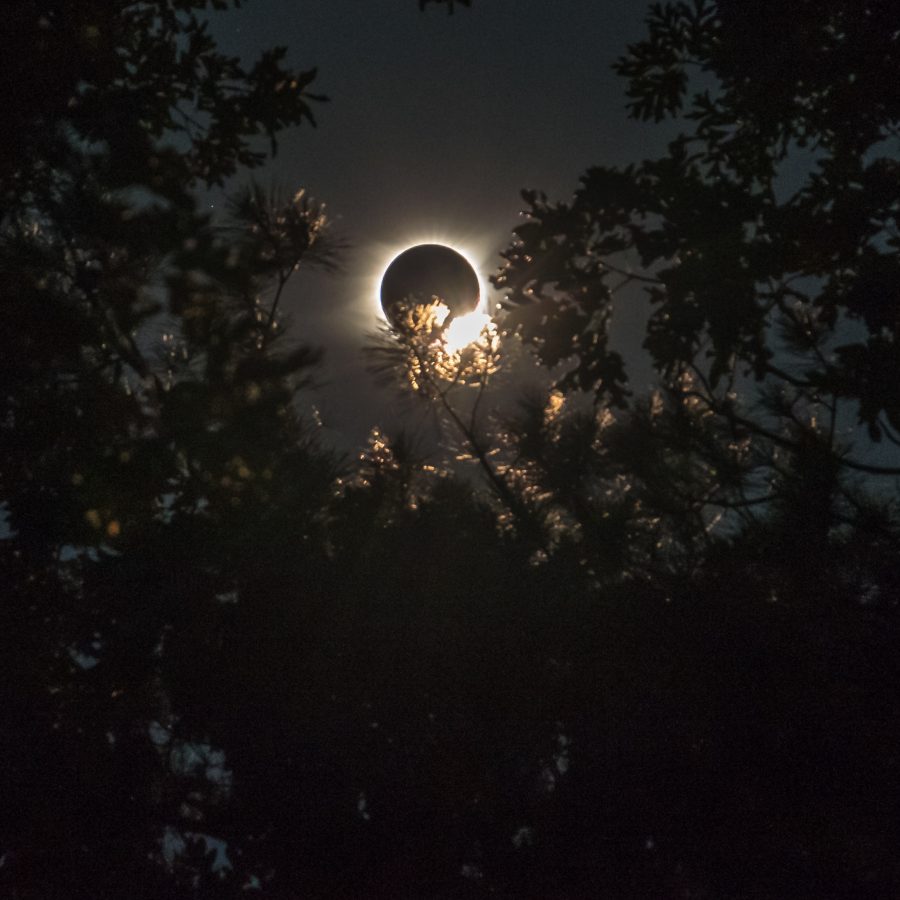 We went eclipse backpacking on the Ozark Trail.

The eclipse was more popular than I anticipated. My plan had been to wait until seven days before the event and pick a destination. I picked seven days because the weather forecast would be more reliable. Unfortunately, waiting that late meant that everything was already booked (and had been for ages). To make matters worse the traffic predictions were not encouraging. I didn’t fancy driving to Kansas City on the day, and Ginger didn’t want to travel on single lane roads either. I was left with a last minute dilemma of where to go.

I checked for wildernesses along the path of totality and noticed that the Ozark Trail / Berryman Trail was nine miles inside the track. The new plan was go the day before and stop at the Berryman trailhead campground if there were any sites available. Berryman is walk-in only, so no one could have booked in advance. If the campsites were all occupied we could head off down the trail a while and wild camp off-trail. I’d even earmarked a potential point to start bushwhacking a mile or so from the trailhead. We’ve not been hiking recently, and predicted 90°F+ temperatures meant I didn’t want us (me) to be hiking too far.

I ‘phoned in and extended the rental on the car Ginger’s had for the past couple of weeks; Ginger has been touring the country, primarily on business, since August 7. She arrived home on Saturday August 19. Just enough time to confirm plans and pack our backpacks ready to get back on the road Sunday.

Sunday’s trip to the Berryman Trail trailhead was uneventful. In fact all I needed to do was say, “Okay Google, take me to Berryman Campground” and that was enough for the GPS to get us there. Though we did lose the GPS signal at one point. The traffic while not light wasn’t too busy either.

We last visited the Berryman Trail in March 2011. The trailhead campground was very much the way we remembered it, except it was full to overflowing, with tents appearing on spare bits of grass. Backpacking along the trail it was to be then.

My plan was to follow one of the creeks that crossed the trail up a hollow looking for a flat spot on the ‘flood plain’.

We left the car at the Berryman Campground trailhead parking lot and set off north along the Ozark / Berryman Trail. It was obvious from the surface that the trail hadn’t been used much recently. There was very little sign of tracks from bikes, horses or hikers. In our time on the trail we only met one other couple going in the opposite direction (south). 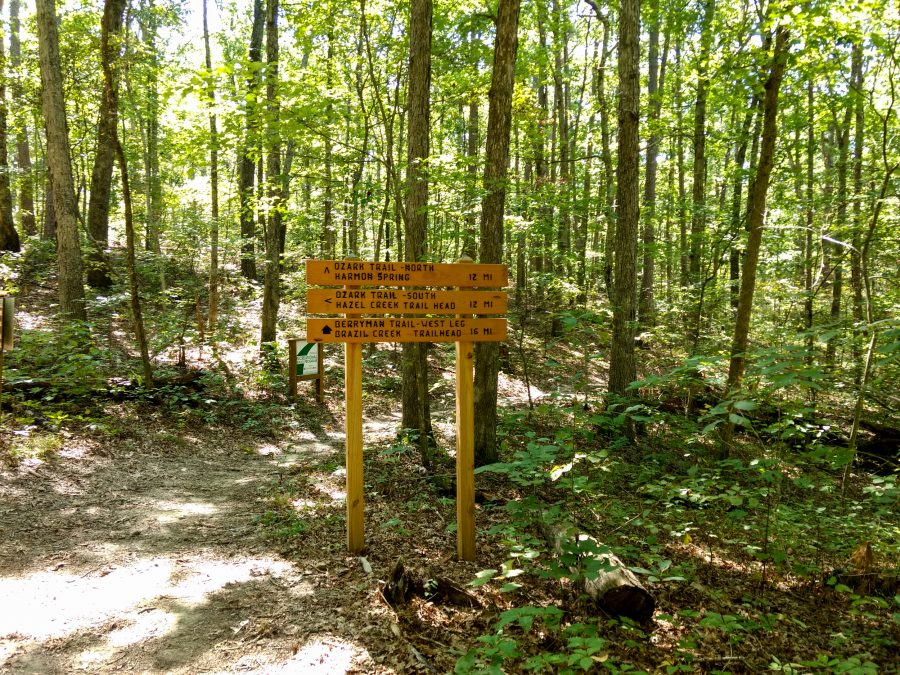 My plan to follow one of the creeks off trail didn’t work out, as in reality the hollows were too narrow and there was little to no water in the creeks either. The trail seems to have been re-routed since our first trip, and we never encountered the creek crossing I was looking for.

Conscious of the time, distance, and heat, we picked a likely looking ridge that offered the chance of some flat spots, and bushwhacked up off of the trail. The tree canopy cover was fairly dense so there was not a lot of ground cover. We bushwhacked 300-400 yards off the trail before we found a spot that worked. The main problem in finding a spot was the large number of dead standing trees – which we didn’t want to be near. We’ve camped twice in the wilderness when a tree has come down nearby, so we always try to remember to look up and around.

Where did you go to watch the Eclipse? Mark Twain National Forest

Between us we had five liters of water and that was going to have to last until we got back to the car – where we had several more liters stashed in a cool box.

Checking out the lie of the land and the tree canopy, it looked like we’d be able to get a clear view of the eclipse – plus I knew that the tree cover would provide an excellent surprise to Ginger on the run up to the totality.

The only problem I had was finding a suitable place for the food bag. None of the trees had strong branches below about forty feet. After much scouting around I discovered a fallen tree that I could hang the food bag from.

View From Our Tent. Mark Twain National Forest – Look carefully and you can see our food bag away in the distance

It’s amazing how well the tree cover stops the undergrowth growing in the forest. I was quite happy barefoot around our camping spot.

Leaves of three let it be. Only this is harmless.

That’s where all the fun will be happening …

Sunrise through the bug mesh on our tent

After we had settled in I was surprised to hear a vehicle, and even more surprised to catch a glimpse of the top of it moving through the trees at the top of the ridge. We’d climbed up higher than we’d thought and were within a hundred yards or so of one of the forest roads. The vehicle stayed nearby (I guess at the end of the forest road) all night. We knew they were nearby but I doubt they had any inkling we were there – which did give us a moment of concern when they indulged in some target practice – fortunately on the other side of the ridge. They cleared out first thing in the morning, and we’d not felt it necessary to make them aware of our presence. Had a stray bullet come in our direction that would have changed very quickly. 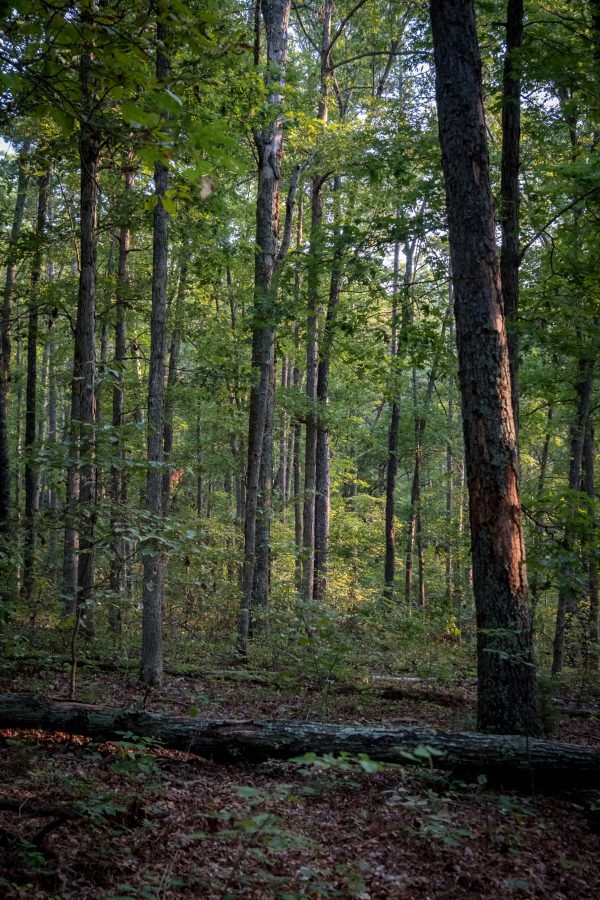 Monday morning we lazed around waiting for the start of the eclipse, packing everything away just before it was due to start. We planned to take advantage of the slight cooling down during the eclipse and hike out as soon as the totality was over.

Watching an eclipse from the middle of a forest is special. Ginger had mocked me for making sure I had my headlight to hand – this was my second total eclipse – so I knew how dark it was going to get, and knew it would be even darker under the trees. I didn’t use the headlamp, but it did get very dark. The trees gave a fantastic display of crescent lights, and the total eclipse was breathtaking seen through the canopy of the trees. Being only nine miles into the track of the eclipse, the period of totality was quite short, and it wasn’t very long before it was light enough to start hiking out.

Is it day or is it night?

No Eclipse Glasses? Use a watch strap instead.

I’d like to be able to say that we had an easy hike out; were delayed a bit in the traffic on the way back to Springfield, but all was fine. Well it was. Except. Except we managed to get into a nest of seed ticks. Now for some odd reason despite having a full bottle of deet, neither of us had put any on. And we didn’t think to stop and apply it even after we knew we’d been in among the seed ticks. If that wasn’t bad enough, when we got back to the trailhead there was a van parked across the trailhead exit forcing us to cross a couple of open sections of grass. At the time I thought to myself “it’d be horrid to pick up a load of chiggers now…” Crossing the grass was followed by several hours in the car while the GPS computed routes around the stand-still traffic on I-44. Plenty of time for chiggers and seed-ticks to dig in. 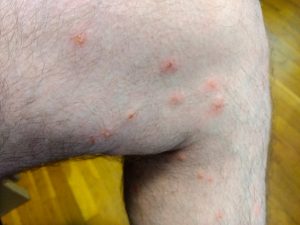 I had a lot of bites. In the hundreds and these weren’t normal chigger bites – these blistered up and were all over me, not just concentrated in folds and crevices. A whole week later and I’m still covered in scabs and blisters. But it was worth it.

I will not forget the deet in future. Ginger had her share of seed ticks, but the chiggers (or whatever they were) did not cause the same blistery reaction in her, so she got off fairly itch free.

I forgot to turn on the GPS when we started hiking so we had to go on our dead reckoning and a map we quickly realized wasn’t at all accurate to try and determine where we were. Our estimate was pretty close as it turned out. The GPS on my phone includes a general topo map so we were able to confirm our estimated position.

We could have carried in more water – but what we had proved to be enough and we had a filter with us not that we saw much water along the trail.

The only things we carried and didn’t use were:

We took the Mutha Hubba tent, while hiking we discussed whether we should have used a combination of the hammock and our single person tent. I’ve not used the hammock out backpacking yet, and for that reason I’d discounted the idea as I didn’t want the complications. The layout of the trees where we were was ideal for hammock camping, so maybe we should have tried it.

This was the second run out for our Trangia alcohol stove and it worked fine. I’m really liking the simplicity and lack of weight. I’ve now asked someone to solder the lip closed so that we can carry it with alcohol in it without it leaking over everything.

I’ve read a lot positive reviews and comments about hiking in kilts. In 2016 I bought a utility kilt to wear to my sister’s steam punk wedding. It’s a great (but heavy) kilt, and I thought I might try it out for hiking, but it is made of very heavy cotton and it takes a long time to dry. The thought of that soaked and weighed down with sweat or rain when hiking forced me to the conclusion that it wasn’t a good idea for hiking / backpacking. Mountain Hardware produce a polyester cotton kilt for hiking. But checking the reviews, people used to traditional kilts said the pleats lacked depth and it was more like a skirt than a kilt. I didn’t like the look of it, so I gave up on the idea. Then a couple of weeks before the eclipse the company that supplied my existing kilt announced a new utility kilt made with polyester cotton rip stop material. Light weight and quick to dry. I bought one and put it through its paces on this trip.

Gentlemen, I have to say, if you are brave enough to wear a kilt, you will not regret it especially in the 95°F+ temperatures we encountered. I am now a huge fan, and intend to wear one hiking and backpacking whenever it’s practical. Once tried, there’s no turning back.

However, Ginger says some of the locals may not be so enlightened, so, if I insist on wearing a kilt and huaraches on the trails of the Ozarks I’ll have to open carry. Okay, that’s not a problem. 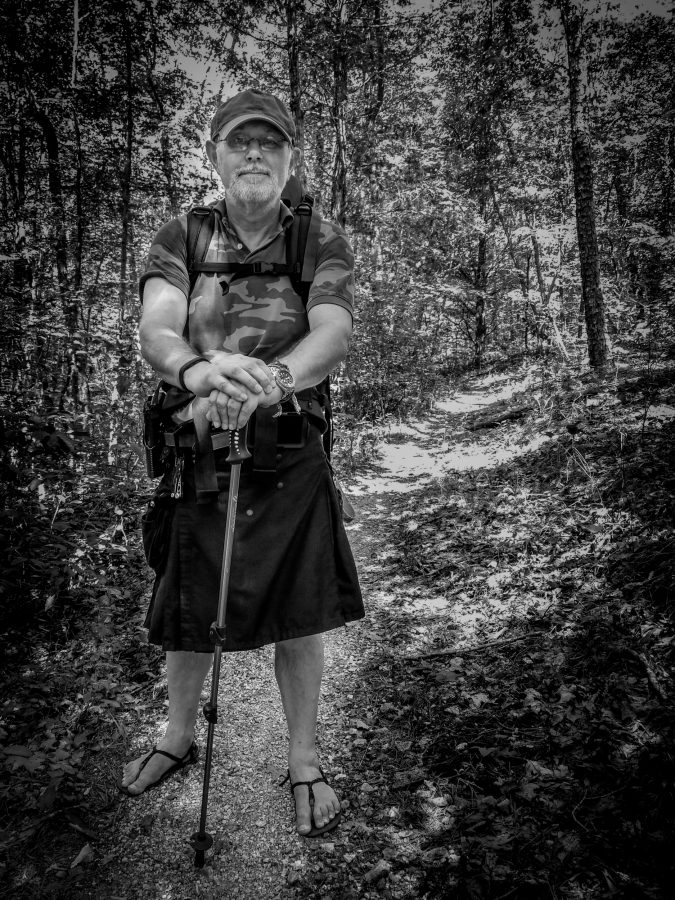 Gary on the Ozark / Berryman Trail – Photo by Ginger

And what did I wear under my kilt? My hiking Huaraches of course! 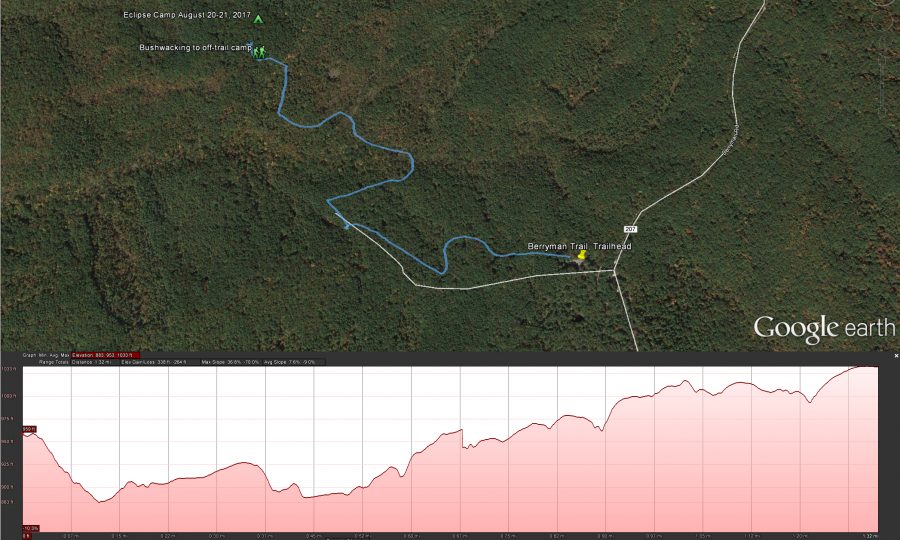