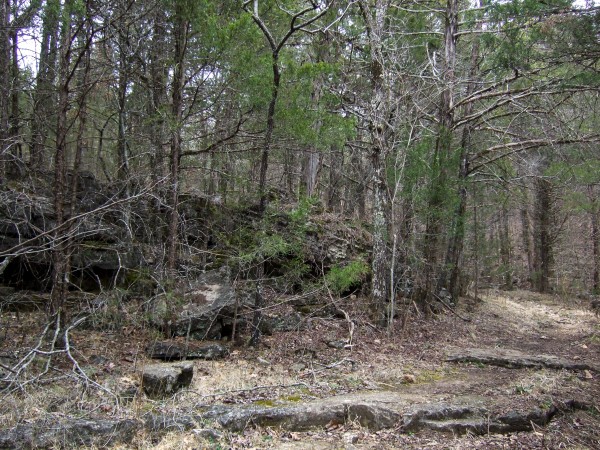 On the ‘Van Trail’ at Busiek

The weather this weekend has been wonderful (especially considering it is still February). However, we’ve not had a chance to get away backpacking as we had commitments in town on Saturday. Today we went on a short hike at Busiek, hiking a little over three miles with around 700ft of elevation climbed.  Remaining true to our recent experiences, we managed to miss the trail and wander around a bit. We took off along a little used trail that finally petered out, which meant we had to backtrack. There were two valuable lessons to be taken from today’s experiences.

I’m thinking of transitioning to hammock camping. Not wanting to waste money on new gear, I decided to reuse an old hammock Ginger bought many years ago. The hammock was meant to be used for lounging by the lake while car camping. Despite its age, weight and design, it should be good enough to for me to check if hammock camping is going to work for me. The hammock didn’t have a tarp – so I bought a heavy but inexpensive ($10.99) cammo tarp from Harbor Freight.

Our plan today was to go off of the regular Busiek trails and set up the hammock to make sure it was a viable option before taking it backpacking. I decided to hike the ‘Falls Trail’ to get well away from everyone. Because we missed our way, we ended up on the ‘Van Trail’. I also wanted  to see if my huge Themarest NeoAir pad would fit in it. If you are not familiar with hammock camping, one of the issues is that you can get very cold unless you have something insulating under you. Dedicated hammock campers invest in ‘under quilts’ which hang under the hammock. People like me (cheap), who are just getting into hammock camping make do with  normal sleeping pads to begin with.

My hopes for hammock camping are:

Well, I got the hammock up in under 4 minutes. But the tarp … That was more problematic. Not only because it was the first time I’d tried it, but because I wasn’t thinking when I picked my spot to set it up, I picked a place where there was brush and small trees next to the hammock preventing me from setting the tarp up properly. D’oh – that’s rather obvious. I quickly discovered that finding a camping spot for hammock camping can be just as hard as finding a suitable spot for tent camping. It was also windy, and gusting quite a bit, so that made for an interesting experience too. The wind taught me that I need a couple more guy-lines for the tarp – I currently only have four, one at each corner.

The good news is that despite the problems I think it is going to work. Even more surprising was that my NeoAir pad fitted in the hammock easily and once it was in, it was very comfy. It was a lot warmer too. I didn’t get a chance to also try my quilt, as Ginger was getting cold sitting around watching me experiment, and she had wrapped herself up in it to get warm. I did try Ginger’s short Thermorest pad – but I didn’t like it. It’s narrow which let the sides of the hammock push against my back, drawing away my body heat.

I took a complete backpacking set-up with me, and everything fitted in a 35 Liter backpack and weighed in at 15lbs including a liter of water. That makes me happy.

I’ve no idea what temperatures this set up is going to work at. That is going to require some trial and error. The weight is looking excellent, especially given that I can get rid of a couple of pounds by getting a ‘proper’ hammock tarp and buying a more modern hammock. Changing the tarp and hammock will also reduce the space taken in my pack too.

I’ve got around $60 invested in this experiment. I bought some hanging straps from Dutchware Gear which are really good and make setting up the hammock a breeze, and of course I also bought the cheap tarp. If the experiment fails I can sell the hanging straps, and the tarp will always come in useful.

I didn’t take any pictures of the hammock as it wasn’t a particularly elegant experiment, I’ll wait until I can get the tarp properly set up before posting pictures. And that’ll be when we next get a chance to go backpacking. 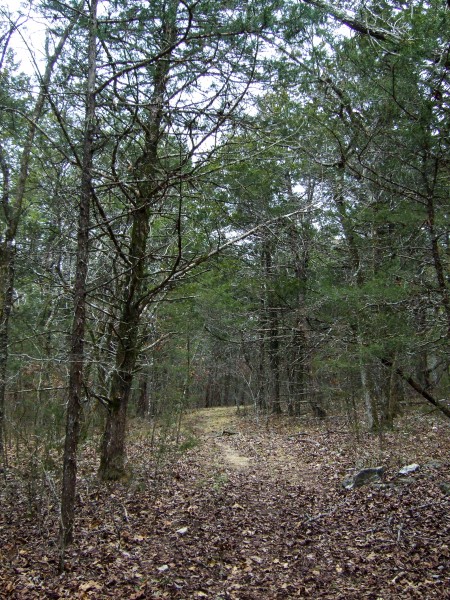 The ‘Falls Trail’ at Busiek 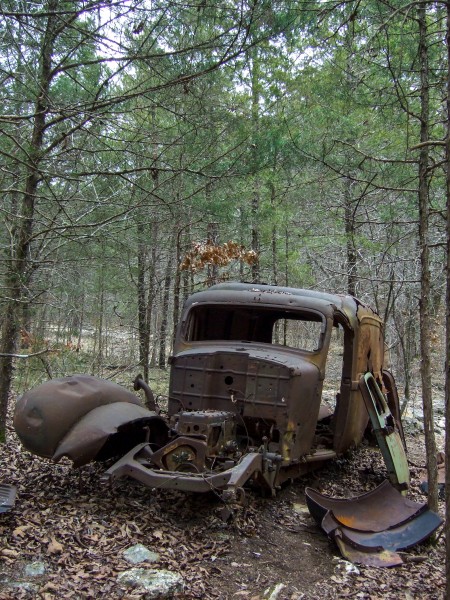 The abandoned panel van at Busiek 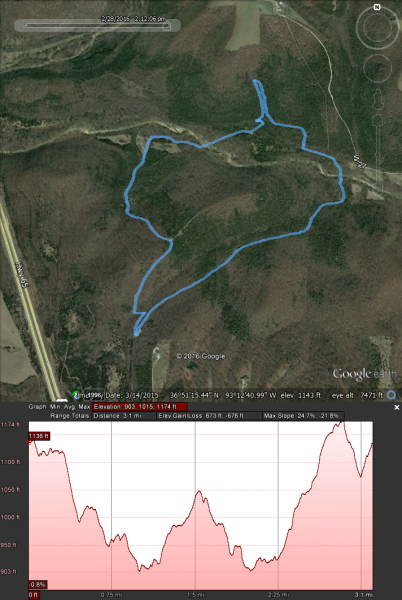 2 thoughts on “A short hike and some hammock gear testing”