In 2012 Bass Pro updated the Ascend FS10 and Ascend D10 sit-in kayak models. Previously the hulls were to all intents and purposes the same. The new Ascend FS10 hull retains the same shape. The new Ascend D10 is a completely different boat, which means the old D10 model reviews cannot be relied upon. We were very interested to see what changes Bass Pro had made so we went along to the Springfield Missouri store for a look.

To be clear, this is not a review of the latest Ascend FS10 – which upon inspection at the store (and from some email feedback I’ve received) seems to be inferior to the 2012 model. My current advice is get a D10, which still seems to be built along the original lines, and kit it out yourself. 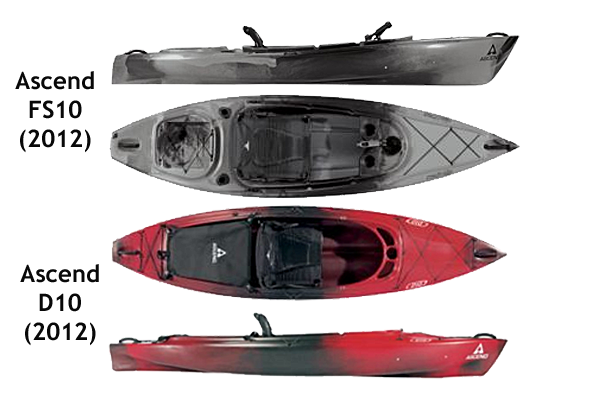 I can’t give you a full review as we’ve not tried them on the water, but here is what I think based on owning the original FS10 & D10 for several years, and what we noticed studying the new boats in the store. If I get a chance I’ll try to add some of my own pictures later. Before I start though I want to answer a question I often see in the search Stats.

Where are Ascend Kayaks made?

Bass Pro will only say that they are ‘Made in the USA’ which may be good enough for most folks. I wanted to know a little more, and there’s not a lot of information out there. Finally I found an article on Missouri Governor Jay Nixon’s website, dated August 29, 2012. From which I can confirm that the Ascend Kayaks are manufactured by Bass Pro’s Tracker Marine in Lebanon Missouri. Here’s a quote from the article:

“
Bass Pro Shops Tracker Marine operates two plants in Lebanon, which together employ more than 600 local residents. The main manufacturing plant was built more than 30 years ago and currently produces boats and pontoons for Bass Pro Shops. The second facility was purchased in 2007 and produces Bass Pro Shops’ top-selling ASCEND line of kayaks, as well as marine parts and fuel tanks for a variety of boats sold by Bass Pro Shop

So there’s your answer. You can read the complete article here.

Back to the comparison. Let’s start with the biggest changes – the Ascend D10.

This comes from a completely new molding with massive changes. It’s shorter at 9’10”, not as wide – at 29″. Part of the reduction in length is due to the stern being tucked in, whereas the original D10’s stuck out at the waterline. The earlier FS10 and D10 kayaks appeared to come from the same basic mold. No longer. If I were to be cynical I’d say it’s to stop people buying the less expensive D10 and fitting it out as a FS10 themselves. I’d also say they’ve cut down on the amount of plastic to cut manufacturing costs, and the revised weight of 46 lbs. supports that (6 lbs. less than the earlier D10) This is a completely new boat and the old D10 reviews just don’t apply anymore.

Hull shape. The fore-aft profile is lower at the front. The seat has been moved 6-12″ further forward. The new D10 has a cathedral style hull, which should put more buoyancy away from the center line, presumably making it even more stable. The cathedral cross-section should also help with tracking. It’d be great to get together with someone who has the new-style Ascend D10 to make some direct comparisons. I think this could be an improvement over the original design. The tray at the front of the cockpit, huge in the older D10, has been sacrificed in moving the seat forward. The depth of the tray sides suggest that this is a structural piece stopping the huge open cockpit sides from flexing too much. Now you only have one cup-holder and not two. Not a big deal.

Buoyancy. Gone are the big foam blocks of the earlier model, instead they’ve opted for sprayed in foam. The disadvantage of this from what we’ve seen, is that the spraying tends to leave a fair bit of debris scattered around inside the hull. On one boat we looked at there was some fairly pokey metalwork from the carrying handle bolts sticking out of the foam.

Seat. The seat’s been changed to a removable steel frame model with a padded seat and back. I like this. You can take it out and go sit on a gravel bar in comfort. We’ll have to wait and see if rust is going to be a problem with this. The position of the seat has been moved forward, as has the front of edge of the cockpit, with much smaller ‘tray space’.

Update: October 2012: We’ve been noticing an increasing number of searches for ‘Seat Problems’ on both the D10 and FS10. We’ve no idea what the problems are, or even if there are any problems. If you are one of those people, please add a comment below or use our Contact form to send us an email, so that we can let people know if there is an issue here, and maybe someone has a suggestion for a solution.

Aft Storage. This is the biggest change. The open cockpit has been enlarged aft extending back almost as far as the original sternwell. With the seat further forward this give a much bigger storage space, but it is completely open except for a mesh cover.

I do not like this. Our older D10 and FS10 get waves washing over the stern even from modest wakes. On our boats this is fine because the sternwell on the older boats (and the 2012 FS10) is molded-in. The worst that happens is that the box fills with water. With the new design any water washing over the stern will end up in the bottom of the boat.

However, with the seat moved forward, and the rear of the opening moved forward, this may not be so much of a problem. I’d love to hear from anyone with the new boat about how this is working out. Judging by the number of searches I see for ‘rear cover Ascend D10’ there are people out there looking for a way to seal the back of the boat off. On the plus side having all that open space does mean you can really stack the back of the boat up with bulky (though not necessarily heavy) stuff. I would love to stick a kid in there and see how the new D10 fairs. 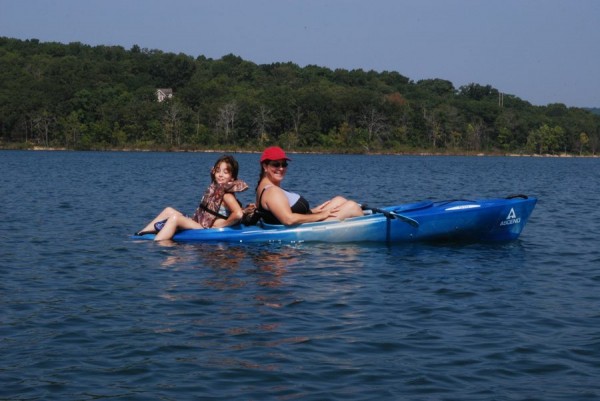 Ginger and Lanie trying out Ginger’s D10 kayak – August 2010. With its seat moved forward there’s a good chance the 2012 model would handle this load better than our older D10.

Summary. This is a completely new boat, so you cannot rely on earlier reviews of the D10 (I guess I’m going to have to go back and add a note to all my earlier reviews). Is it better or worse? Sorry I can’t help there, unless someone wants to lend me one to take out on the lake for a spin.

The 2012 Ascend FS10 looks essentially the same, and the dimension seem to be about the same. It weighs in 1 lbs. heavier than the earlier model at 51 Lbs. I’d put that down to the new seat and cockpit tray design.

Here’s what we saw.

Hull shape. The basic hull shape has remained the same.

Without going over it with a tape measure it looks like the size of the forward cockpit tray has been reduced, though it might just look like that because of the introduction of a new watertight storage compartment mounted forward of the rod holder. The compartment looks a bit small for anything other than a ‘phones or GPS receiver. Speaking of the rod holder, this looks much improved over the original FS10’s.

We liked the revised padding on the cockpit sides; which addresses a lot of complaints about the bit of foam rubber stuck to the side of the original FS10’s cockpit.

Buoyancy. Gone are the big foam blocks of the earlier model, instead they’ve opted for sprayed in foam. The disadvantage of this from what we’ve seen, is that the spraying tends to leave a fair bit of debris scattered around inside the hull. This does give more leg room up front.

Seat. The seat’s been changed to a removable steel frame model with a padded seat and back. I like this. You can take it out and go sit on a gravel bar in comfort. We’ll have to wait and see if rust in the seat frame is going to be a long-term problem.

Summary. The new Ascend FS10 kayak seems to be based on the original FS10 / D10 mold. The changes seem to be minimal. I like the new lift out seat (make sure you keep it tied to the boat in case you capsize). In fact, I like this so much, I’m going to see if I can retro fit one in my older FS10. Would I still recommend the FS10 for fishing and kayaking in the Ozarks? Absolutely. At $499.99 it’s a great buy, and rugged enough for our rocky lake shores and creeks.

Note: 2012 Ascend FS10, D10 top and side view images taken from Bass Pro. Used under the terms of ‘fair use for review’ purposes.

See our other kayaking & canoeing posts and resources.