We love campsites with spectacular views, who doesn’t? Looking at the maps and Google Earth, we hoped we’d managed to find a fantastic camping spot on top of a set of 260 ft. high bluffs overlooking Beaver Creek, in Hercules Glades Wilderness. We just needed to get there and check it out.

With Springfield Schools out on Friday we decided to take advantage of the long weekend and go on our first backpacking trip in a long while. We’ve spent so much time tied to our desks over the past few months that it seemed like we’d never get away again, let alone check out the bluffs we’d found.

We are out of condition so we planned for a modest hike with opportunities to explore, map some trails we’ve not hiked before, and spend some time sitting around doing nothing for a while. 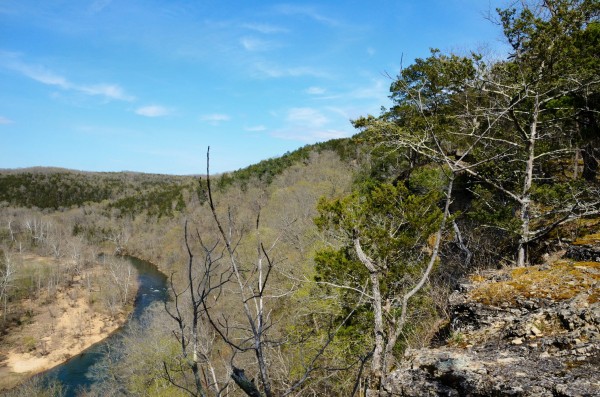 We’d found the spot while studying the Hercules Glades topo maps several months ago. We noticed a set of bluffs by Beaver Creek on the western side of the wilderness. 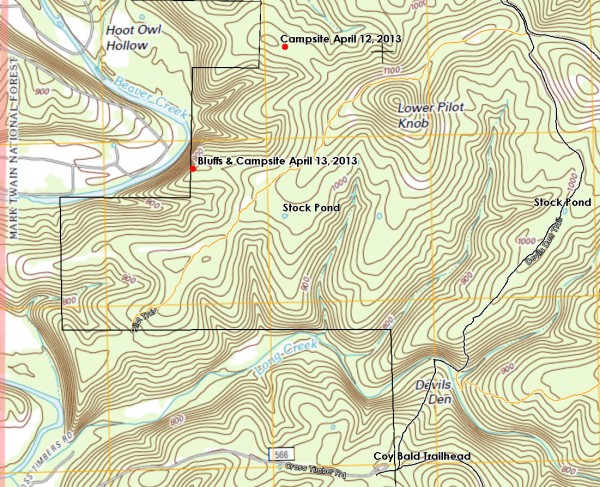 Checking on Google Earth the bluffs looked to be quite spectacular and they offered the chance of some great views. They also looked a fair way from the marked trail, which is good, because it meant the area probably wasn’t visited much. Finally the area at the top of the bluff looked flat enough to offer some good campsites. 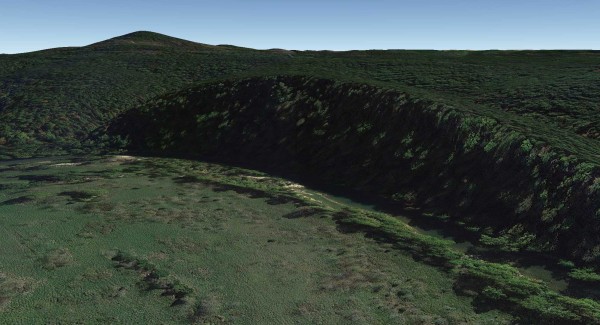 Google Earth View of the Bluff – Lower Pilot Knob in the distance.

The only minor problem was that there’s no water nearby (not counting Beaver Creek at the bottom of the bluffs). Again checking the topo map and Google Earth, we could see a stock pond in the area, which looked like it held water year-round, which would probably do in an emergency.

Shortly after 2pm on Friday we arrived at the Coy Bald trailhead ready to start the descent down to the Long Creek crossing.

At the start of the hike we noticed someone’s either taken the Coy Bald trail sign, or it has been blown away. Whichever, the trail sign is missing.

At the campsite at the bottom of the hill we met the only people we were to see the entire weekend. A couple of hikers from Ozark and St. Louis were taking a snack break. They were on a hike from their camp by Long Creek Falls. After a short chat we carried on our way – crossing Long Creek which was flowing quite well, and then climbing up the Devil’s Den (west) Trail. The last time we hiked this route I carried a full load of water. This time we were much more sensible and only took a small amount of water in our water bottles. We would fill up once we had climbed up the Deveil’s Den trail. 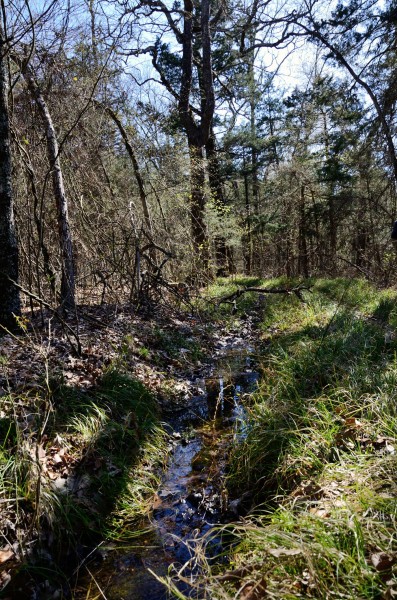 Shortly after passing the stock pond at the top of the hill we found a small ephemeral creek running beside the trail. We filtered and treated nearly 10 liters of water, enough to hopefully last us until Sunday.

It was then on across the open glades and up to the Pilot’s Trail. There we turned left towards Lower Pilot Knob, breaking new ground for us.

There’s cell phone coverage up here – we know as we got a call.

Looking for somewhere to stop for the night on the wilderness map we noticed a long flat ridge running north-west from the trail which had a forest road marked on it. We bushwhacked down and eventually met the old forest road, now just a fairly well-worn trail. We set up camp as far from the trail as we could without getting into the steep valley slopes.

The forecast was for a 30°F night, so we gathered wood for a fire to keep us from getting chilled.

In the course of the evening we spotted four satellites but no shooting stars. As it turned out the temperatures didn’t drop below freezing and in the early hours of the morning they started to rise again.

Saturday we got off to a late start and this time followed the trail back to the Pilot’s Trail. It needed a bit of Bushwhacking as it was obvious the trail we’d found was going back to the cairn at the junction of the Devil’s Den and Pilot’s trails.

Once on the Pilot’s trail, it was pretty much all down hill.

The trail behind Lower Pilot Knob doesn’t seem to be much traveled, and it was a bit overgrown in places.

As we suspected, there was a clear trail leading to the Stock pond shown on the map (and earmarked as a possible emergency water supply). There was a small cairn marking the junction which is actually a crossroads. Our first thought was that the right hand (north) trail might lead to the bluffs.

We explored the stock pond first. The water looked healthy though very brown colored, and fluffy cattails around the edge of the pond made for some nice pictures. We checked out the surrounding area, and then went back to the crossroads. The North trail only went a short distance before stopping at what appears to be a hunter’s campsite. So we bushwhacked on to the bluffs. The going was fairly easy though the catbriars (smilax) were quite thick in places.

When we got there the view from the bluffs was worth the effort.

We camped, we rested laying out in the afternoon sun, and we sat around. We sat near the edge of the bluff and watched the sun go down.

View from the top of the Bluffs – Hercules Glades Wilderness

View from the top of the Bluffs – Hercules Glades Wilderness

Camped near the bluffs on Hercules Glades Wilderness

Camped near the bluffs on Hercules Glades Wilderness

View from the tent

The bluff edge trees are covered in ‘Old Man’s Beard’ probably due to the moisture coming up the bluff from Beaver Creek.

Anyone know exactly what these are?

Spring is beginning to arrive in the Ozarks
Note. The bluffs are near vertical. This is not a place to take young kids or over-exuberant teenagers, pets, or friends. A mis-step could be fatal.

The only issue for me was the ticks. I found loads of the blighters climbing on me. Unfortunately a couple slipped past my defenses too. One of the advantages of wearing huaraches and shorts rather than the recommended boots and long pants is that you can catch and dispatch any ticks as they climb your legs.

Of course the disadvantage is the number of minor scratches you can pick up if you’re not careful wading through the catbriars.

Sunday we had to hike the all the way back to the trailhead. A little over four miles.

So, we were up and away in record time (for us). We ran out of water while hiking the Pilot’s trail, so we stopped at the same spot to fill our water bottles. On the glades I broke a lace on one of my huaraches, so we had a brief rest while I tied a new knot.

We found some Morel Mushrooms on the hill down Devil’s Den Trail – but only three. Not enough for a good meal. We stopped for lunch at the bluffs by Long Creek, gathering our strength for the climb back up the hill to the Coy Bald Trailhead, and home.

Trail and glade to the east of Lower Pilot Knob, Hercules Glades

Gary fixing the laces on his huaraches on the trail

There was water in the Devil’s Den Creek

Lunch break at the Bluffs by Long Creek (looking up-stream)

Lunch break at the Bluffs by Long Creek (looking down-stream)

What we didn’t know at the time was that while we were busy hiking the Google cameras were busy taking new aerial pictures of the area for Google Maps and Google Earth. You can read about that here: Caught on Google Earth

Notes on our preparations

Three things were of concern on this trip:

The only thing we could do about our being out of condition was to take it easy, going slow, and stopping as often as we needed to. Not carrying 15 lbs of water up the Devil’s Den trail helped too! I was also fairly ruthless about my packing to keep my pack weight down.

Despite predicted overnight temperatures of 30°F I decided to take my 40°F GoLite Ultralite 800 Fill 1+ season quilt to see if with the liner and a base-layer combined with my Neo Air All Season sleeping pad I would be warm enough. We also took heavy fleece bags, which we use to wrap around us while sitting around the fire (There’s no way I’m letting my expensive down bag near the campfire!), so I knew if I got cold in the night I could call on one or both of them to keep me warm. I was plenty warm enough with just a baselayer top, liner and quilt. The recorded overnight low temperature at near-by Branson was 34°F so not as low as I had hoped, but the results none-the-less were promising. Which is great as the quilt weighs just 1 lb 3 oz and compresses down really small. Ginger of course took her 0° Montbell super spiral bag.

For clothing I took a baselayer, ‘thinsulate’ hat, a thin fleece, a thicker fleece, woollen toe socks and the heavy rain jacket. This was in addition to what I was wearing – camo undies (of course!) a long-sleeved shirt and pants with zip off legs. On the cold first evening, I wore everything (yes two fleeces). We’ve found out the hard way that it’s better to be too warm before going to bed than allow yourself to become chilled.

I fear that in the interest of lightening my pack I’m going to finally have to stop carrying my favorite Coleman Exponent stove in favor of the Pocket Rocket which is smaller and lighter. We’ll see.

The camp saw certainly won’t be going with me again, it’s a waste of space and weight, and I hate using it anyway.

The GPS proved useful, though we still refuse to use it for navigation. For example, I managed to select an incorrect way-point, which would have led as miles astray if we’d followed it’s instructions. The small screen just doesn’t give you enough of an overview of the topography to be useful. However, for recording where we been and mapping the trails, it’s invaluable.

We didn’t take the weather radio as we felt the forecast was stable enough for the time we were going to be out.

I did take the big 2.5lbs DSLR camera. Until I can afford a light weight, high quality replacement I’ll just have to put up with it.

Finally, the big 6 liter MSR water bladder backed up with a 2.5 liter Platypus hydration bladder gave us enough water to stay a couple of nights away from a water source. We always carry our MSR Sweetwater pump and filtration unit, and also chemically treat our water (bleach not iodine). As in previous trips we steered clear of static water sources such as stock ponds and used running water. Following the recent rain, we knew there’d be water around, and there was.

1 thought on “Trip Report: Finding the Bluffs at Hercules Glades”