Spring Break 2011 we hiked the Berryman Trail. Spring Break 2012 we hiked Bell Mountain, got spooked at Rock Pile Mountain, stayed at Marble Creek campground, spent a couple of nights at Johnson’s shut-ins State Park at a campsite with a built in balcony, visited Taum Sauk and hiked the Mina Sauk trail and I took a very cold shower in Mina Sauk Falls (it was March). This year we’ve some family commitments so we’re on a mini road trip to Florida for a family wedding and no prospects of hiking.

We’ll be camping on the way to and back from Florida, so we’ve packed our backpacks plus a couple of overnight bags. What stunned me was how much more difficult it was to pack for a few days socializing than for a backpacking trip into the wilderness.

Going backpacking for a week? All I need are my trusty hiking huaraches, the clothes on my back, a spare pair of undies, a base layer, pair of socks, a fleece, and hat in case it gets cold and some rain-gear. That’s it. Simple.

Ignoring the extra stuff just for the wedding for this trip I’ve packed several shirts a couple of pairs of pants and two pairs of shoes, several pairs of socks, and a pair of flip-flops. Why? Because it would be considered bad form to turn out in the same clothes twice – even though modern washing machines and dryers would allow me to get away with just two of everything, a trick I used to great effect when travelling abroad on business.

People always think that camping is complicated and are reluctant to get out because of all the gear they think they need. But really, a streamlined backpacking kit is so much easier than packing clothes, toiletries, and electronics for a typical vacation.

Well, we’re all packed. We have every possibility covered. Our only concern now is whether the house will still be standing when we return. We’ve left the teenagers and Getzger Cat in charge.

The trail here starts with a six hundred foot climb to the ridge – which is why we decided to use the trailhead on the other side of the Wilderness – it is on the ridge saving a lot of climbing.

2010 MSR Mutha Hubba tent in Ozarks woodland on a ridge in the Bell Mountain Wilderness.

Gary near the summit of Bell Mountain in Iron County, Missouri

If you think that boulder is big, think about the one I’m standing on

The walk-in campsites at Johnson’s Shut-ins State Park were rather nice with a built-in balcony and railings.

Mina Sauk Falls, Missouri – I’ll save you from having to see the picture of Gary taking a shower 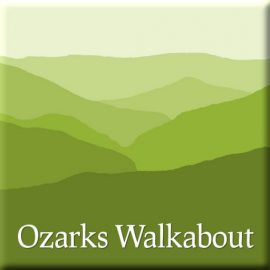