I’ve just about finished fitting out my kayak, ready to be out fishing and exploring the Ozarks’ lakes all year round.

The only things I’ve not fitted are navigation lights for night fishing. I’ve found a small 12-volt lead acid battery which will power the navigation lights, and if I ever change my mind about getting a fish finder it ought to be good for powering that too.

Here’s what I’ve done so far: 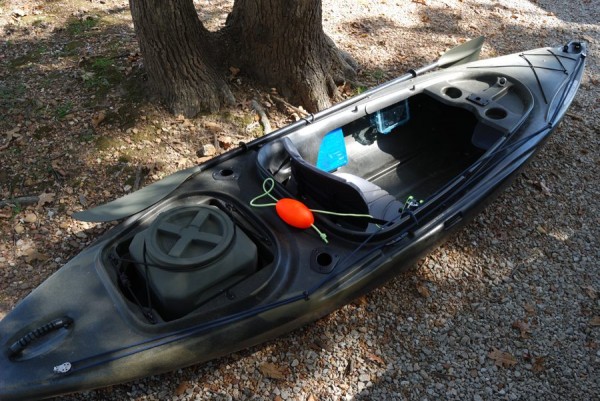 Gary’s Ascend FS10 Kayak already for the lake and fishing

I’ve added a traveler for the anchor (anchor trolley), the water tight storage box in the rear well – now painted camo green, there’s a holder for my .50 caliber ammo dry box and another for the small drybox for my cell phone, weather radio and walkie-talkie (much easier than shouting). I’ve also added a small compass for lake and night fishing navigation.

The airtight pet food storage containers were an excellent find, and are available in several different sizes. The one here is 4.5 Gallons.

I’ve since added a 12-volt battery box we found, which is kept behind the seat. It’s not a sealed waterproof container, like the one in the rear well, but it keeps things out of any water slopping around in the bottom of the boat.

For dry storage behind the seat of Ginger’s Ascend D10 we bought a battery box from Bass Pro. We threw away the lid as it wasn’t needed. The box was taller and wouldn’t fit under the deck so I carefully cut the top 1″ or so off it by resting the box on a length of 2″ x 4″ lumber and feeding it through a table saw. The lumber was needed to space the carrying handles off of the saw bench. After that it fitted easily. 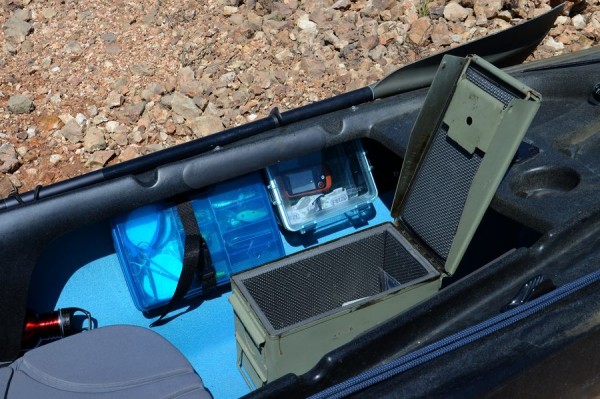 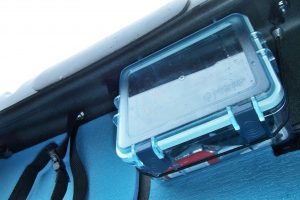 Under deck view showing how the dry and fishing tackle boxes are secured.

In the picture above you can see the storage added under the side deck. For the small dry box I through bolted a couple of webbing straps on the inside, and I use a bungee to hook on to them and hold the box in place. To stop the bungee slipping off the box I cut a notch for the bungee into a couple of protrusions on the case.

The fishing tackle box is held in place by a webbing strap I found on an old bag at a yard sale. I secured the strap by through bolting it to the hull. The pan headed bolt I originally used was right where my paddle passes over the hull. I didn’t realize how close my paddling tolerances were until I kept on catching it with my paddle. Fixing it was easy, I replaced the pan headed bolt with recessed one.

I pass the securing strap through the tackle box’s carrying handle. Once I’ve tightened the strap it’s not going anywhere, and the box isn’t going to spring open. I’ve driven hundreds of miles with my tackle box secured inside the kayak with no mishaps. 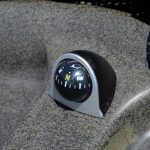 The compass is a cheap $6 car dashboard compass. It has to be a car compass as you want to know which way the kayak is heading. A normal hiking style compass just points to North, which isn’t quite the same thing.

Fitting the anchor trolley to the FS10 was a bit of a nuisance. At the bow the flotation block is in the way of reaching right to the end for bolting through the deck, and at the stern the rod holders and the stern well is in the way.

The front flotation block can be easily removed. It is held in place by a single screw in the middle of the foredeck which screws into a plastic ‘L’ bracket which is wedged into the block. Simple and effective. Re-fitting, it can be tricky getting the screw to line up with the screw hole. When I removed it to fit some bolt through ‘D’ fixings at the front, I used a sharpie to mark the position of the hole and with Ginger’s help peering through the screw hole it was easy to get it into the correct place with the sharpie lines guiding us to the hole.

Despite the front flotation block being easy to remove and replace, I didn’t bother when I fitted the traveler. That was because access to the area behind the stern well is a different problem. If I had wanted to bolt the rigging blocks through, the only solution I could come up with was to cut an access hole in the back of the stern well and fit a water-tight hatch. I didn’t feel like going to all that trouble. My solution was to screw the blocks to the deck using the biggest gauge self-tapping stainless steel screws that would fit through the mounting hole. Between the block and the hull, I put a stainless steel washer. In several season’s use I’ve not had any problems with it.

Instead of screwing/bolting the rigging blocks to the hull a lot of people rivet pad-eyes at the bow and stern and use a bit of shock cord to attach the rigging blocks. Some people don’t bother with the rigging blocks at all and use stainless steel rings instead. The advantage of using rivets is that you don’t need any access to the back side of the hull to fit them.

I also riveted a couple of ‘J’ hooks to guide the traveller rope away from the coamings, rod holders etc… For rivets I had to use the fairly expensive long reach black aircraft grade aluminium rivets. They do an excellent job.

I have also fitted a jamming cleat to hold the traveller rope still. I remembered to make sure I put it somewhere I won’t hit it with the paddle when I’m paddling. That’s a mistake you only make once. 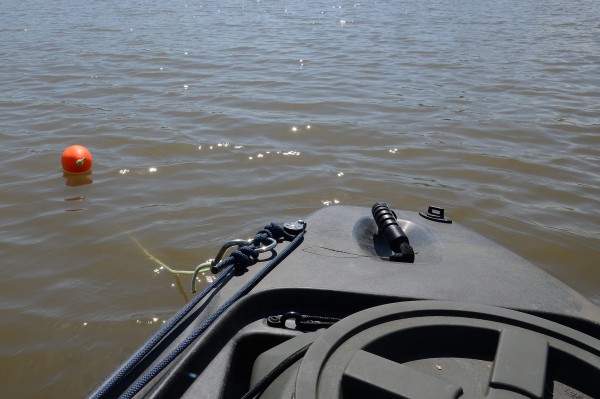 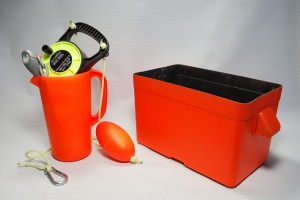 We use a 3lb grapnel anchor with 3′ of chain. I opted for a heavier anchor because we generally tie the two kayaks up together when we anchor. The chain is tied to a 150′ Dive Reel, which has an anchor buoy attached, and is clipped onto a ring on the traveler rope. If I need to cut loose in a hurry I just unclip it from the traveler and come back and pick it up later. I’ve no idea what the breaking strain on the dive reel line is if it ever breaks I’ll let you know!

What happens when your anchor gets snagged. The bread tie breaks, and you haul it up by the crown

Note on setting up the anchor. I’ve got the anchor set up to capsize if it gets fouled. The chain is shackled to the Crown of the anchor and looped to the eye in the shank. I’ve used a standard bread bag tie to join the chain to the anchor. If the anchor gets hooked up on anything, pulling hard breaks the tie and the anchor is then up-ended by pulling on the crown, hopefully un-fouling it at the same time. The ties are plenty strong enough judging by the huge and heavy waterlogged limb I managed to haul up from the bottom of Harry S. Truman Lake. 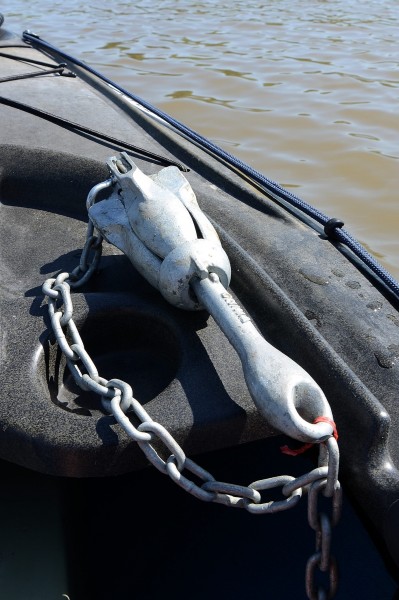 You can see the red bread tie used to secure the chain to the eye in the anchor’s shank.

I’ve also changed the colour of the paddles to camo green, so it’s all a lot more harmonious with the surroundings; at least that is the plan. The paddle is 230cm long. 240cm would have been better but BPS didn’t have any at the time, and I was eager to get out on the water. You soon learn not to bash the boat with the paddle. 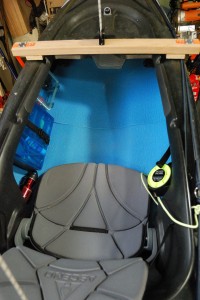 Fitting out our Kayaks for the winter

We use the kayaks through the winter, and I fancy some late and early season angling. The cold from the surrounding water can be a problem, so I fitted insulating foam into the hulls. We’ve not read about this anywhere, but it works really well. It also has the added advantage that it keeps any loose water in the bottom of the boat away from your legs. You can read more about this here.

See our other kayaking & canoeing posts and resources.

Note: in 2012 Bass Pro brought out new Ascend D10 & FS10 models. Read about the differences in our short review