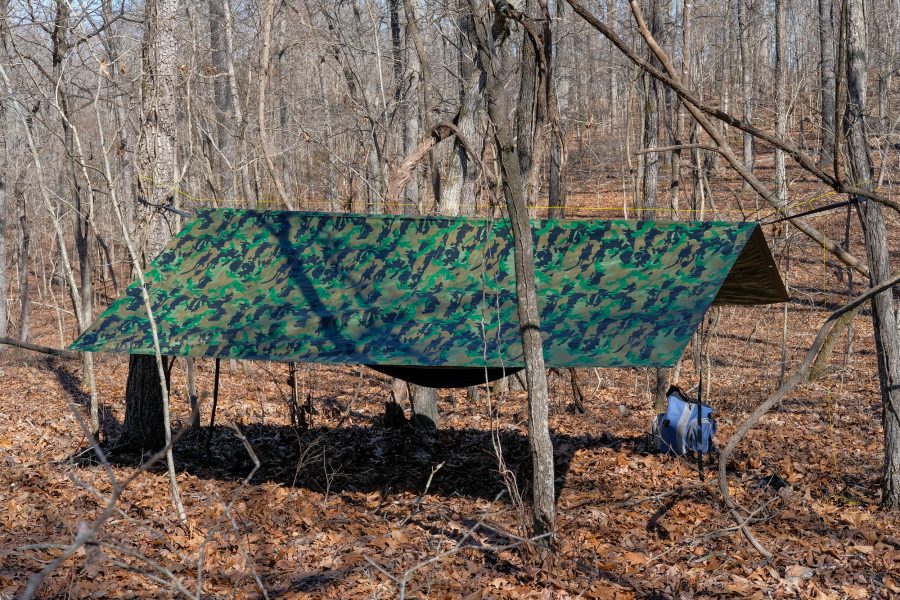 I’ve been wanting to try hammock camping for quite a while. I’m reluctant to purchase all the necessary gear unless it’s something I’m sure I will be comfortable with — and in. I’ve been pulling together the necessary bits and pieces so that I can try out a hammock before investing a lot in a new system. Today I took my hammock gear out for a test setup. 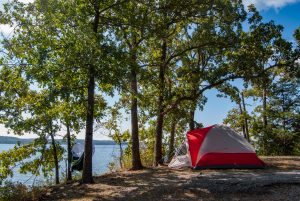 I bought an $11, 8′ x 11′ tarp (camo of course!), it’s very heavy and doesn’t fold up small, so it’ll be no good for long-term use, but it will keep the bad weather off of me while I discover if Hammock camping has a place in my future. I also invested in an up-to-date hammock suspension system. All of this I’m trying out with a hammock we bought in 2010 for use when we were car camping. We only used the hammock once, and then we transitioned to backpacking. The hammock has been sitting idle ever since.

Hammock technology has moved on in the last eight years, and the hammock was a budget model, but I figured that it will be good enough to see if I want to take up hammock camping. Ginger is quite happy with our High Sierra one person tent, and in the tangles of the Ozarks forests, finding a spot to pitch the smaller tent and the hammock will, hopefully, be easier than finding space for our 3-person Mutha Hubba. Weight and size-wise the current set-up will be bigger and heavier than the Mutha Hubba — because of the heavy tarp and the heavyweight material used for the hammock itself. But if I get on with it, a modern hammock and tarp will be a lot smaller and lighter.

The thing I’m really looking forward to is the ease of setting it up and breaking it down. Not that the Mutha Hubba is difficult, it’s just that the hammock should be easier, and offer a lot more options for where I can camp, especially as it doesn’t need a flat ground surface.

Before going off backpacking with the hammock I wanted to get in a test set up, so I took it with me on a day hike on the Silver Trail at Busiek. This was my second attempt at setting up the hammock and tarp. I tried setting it up once before in 2016, but made a very poor job of selecting a suitable site and so when it came to us going backpacking in August last year I decided to stick with something I knew — the Mutha Hubba.

I did some more research over the winter and as a result, I’ve set up a structural ridgeline on the hammock, and I spent a bit more money on a ridgeline for the tarp — as I’d had trouble setting the tarp without one.

Today’s test went fine – except I forgot to pack the stakes to peg out the tarp. There were enough small trees and bushes around to get the tarp taught, but it wasn’t ideal.

Other things I discovered: I had the hammock ridgeline a tad too short, and I set the hammock suspension too high up the trees. And finally, at first, I set the suspension up too loose. Having the suspension too loose was fun, as the cinch buckles didn’t cinch properly dumping me on the ground the first time I climbed in. I wasn’t dropped hard, it was very graceful, but I was glad there was no one around to watch. However, learning this stuff was what today was all about. The new ridgeline for the tarp was great, it made setting the tarp up a whole lot easier, as I can set up the line, get it level and then hang the tarp from it.

The result looks very ‘Ozarks’, but it should be good enough, now I’m waiting for a warmish night 45° or more, for the first proper test. If it all goes well, I’ve already selected the hammock I’m going to buy — a Chameleon from DutchWare. 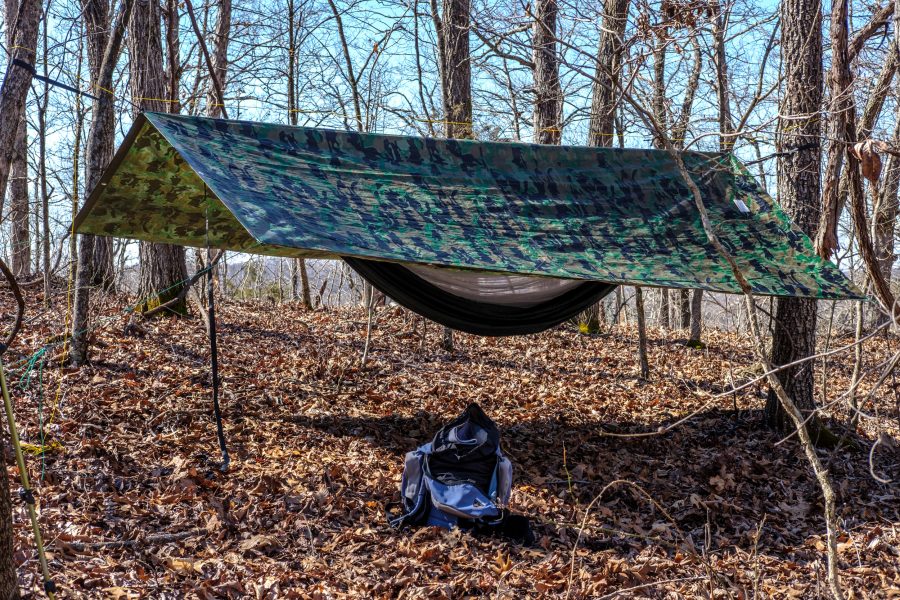