“What to do when lost in the woods” is the title of a 1946 Forest Service flyer. When I read the title on Twitter I was immediately intrigued. I wondered what long-lost gems I might learn, and I wondered if there’d be any out-of-date ideas I could chuckle at. So I followed the links and eventually found the original text (transcribed below). 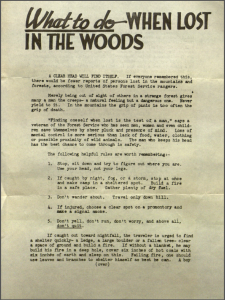 I’m glad I did. The language is a bit quaint, and the phrasing is not as politically correct as we are used to, but there’s a lot of good old down-to-earth common sense. Today I’d not be tempted to rely on a smoke signal to get me out of trouble, there’s just not the people watching for it, but apart from that it’s all good stuff.

What do you think?

What to do – WHEN LOST IN THE WOODS

A CLEAR HEAD WILL FIND ITSELF. If everyone remembered this, there would be fewer reports of persons lost in the mountains and forests, according to United States Forest Service rangers.

Merely being out of sight of others in a strange forest gives many a man the creeps- a natural feeling but a dangerous one. Never yield to it. In the mountains the grip of panic is too often the
grip of death.

“Finding oneself then lost is the test of a man,” says a veteran of the Forest Service who has seen men, women and even children save themselves by sheer pluck and presence of mind. Loss of mental control is more serious than lack of food, water, clothing or possible proximity of wild animals. The man who keeps his head has the best chance to come through in safety.

The following helpful rules are worth remembering:-

If caught out toward nightfall, the traveler is urged to find a shelter quickly- a ledge, a Large boulder or a fallen tree- clear a space of ground and build a fire. If without a blanket, he may build his fire in a deep hole, cover six inches of hot coals with six inches of earth and sleep on this. Failing fire, one should use leaves and branches to shelter himself as best he can. A boy lost on a southern California mountain peak spent three nights safely in this manner.

Signal fires are the quickest way to attract attention. Build them in an open spot cleared of all inflammable material so that fire won’t spread into the forest, (you don’t want to burn yourself up, of course). In the day time throw green branches and wet wood on the blaze to make smoke. The eagle eye of the Forest Service fire lookouts or the observers in forest patrol planes or commercial ships may spot your smoke. But it is difficult for an observer in a plane to see a lone man in the forest, so the lost person must use ingenuity, and the signal smoke is the best method of attracting attention.

A word from the Forest Rangers to the new camper, hiker, or
vacationist ——

It is better to carry a clear head on your shoulders than a big pack on your back. Yet in going alone into the forest it is well to go prepared to get lost. A fish line and a few hooks, matches in a waterproof box, a compass, a map, a little concentrated food, and a strong knife carried along may save a lot of grief. A gun may help as a signal, seldom for game.

A thinking man is never lost for long. He knows that surviving a night in the forest he may awake to a clear dawn and readily regain his location. His compass may be useless because of local magnetic attraction but he may know what kind of vegetation grows on the shady and what on the sunny side of a ridge. He knows that streams going down and ridges going up do not branch. He knows that wild food which sustains animals may be eaten sparingly; that he will not die of hunger as quickly as of thirst; that he must remain where he is push on to some definite objective, but not to the point of exhaustion; that someone will be looking for him, and strength in that knowledge makes hardships easier

Keep the old brain in commission and the chances are you will come out of the woods on your own feet.

Thanks to: Meanderthals and Brain Pickings for bringing this to my attention.