There are several types of kayaks and many new styles have come out in the last few years. Kayaking is quickly becoming a popular sport, and for good reason. Nearly everyone lives near a body of water. Kayaking requires (aside from purchase of the kayak, paddle, and life jacket) little outlay of cash. You can enjoy time on the water without having to deal with the expense and struggle of owning a motorized boat. And best of all it can be as easy and peaceful…or as challenging and demanding as you want to make it. 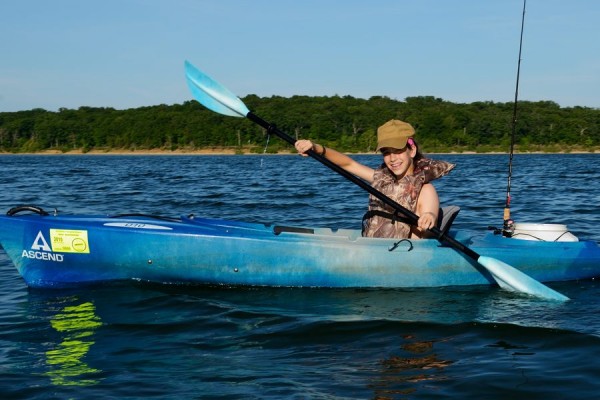 Kayaks generally come in three shape types. Touring kayaks are typically long with pointed ends and best used on flat open water. They have great ability to go in a straight line easily without going off course, but they’re not good for sharp fast turns. Whitewater kayaks are usually short and compact for use in rough water where navigation around rocks and rapids is needed. They’re not good at going in a straight line but they’ll turn (and turn over) on a dime. The third kind, and the kind most often seen on Missouri’s creeks and rivers is the recreational kayak. It’s a moderate length, usually 9-14 feet, tends to have at least some keel shape to the hull so it tracks fairly straight. I guess you could call it a hybrid kayak. The recreational kayaks come in two main styles, the sit-in and the sit-on. The sit-on style is popular with fishermen because you can access all your gear easily, while the sit-in style is better if you’re going to be carrying camping gear or if you kayak in cold weather and need to keep water off your body. 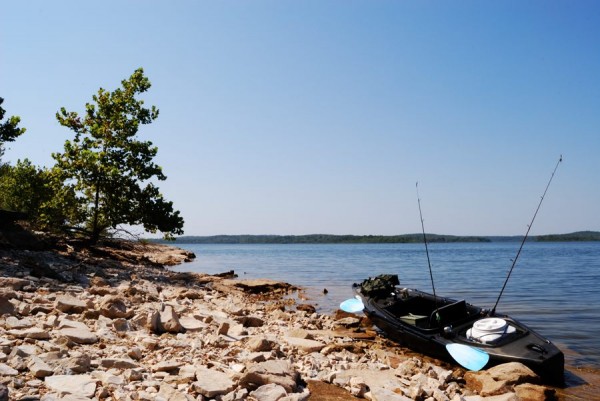 Stopped for lunch – Kayaking and fishing on Stockton Lake

We have Ascend kayaks by Bass Pro Shops. They’re built solid as a rock and have a wide base that makes them quite difficult to tip over. They also have a keel and that means they can track well in a straight line so they don’t need constant correction if you’re headed across a lake.

Gary has the FS10 model, which is the fishing model, and as such he’s made quite a few modifications to his boat. You can read all about the modifications in Gear Talk. 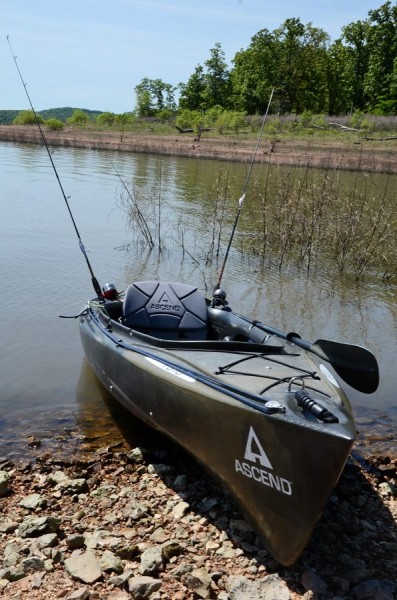 See our other kayaking posts and resources.